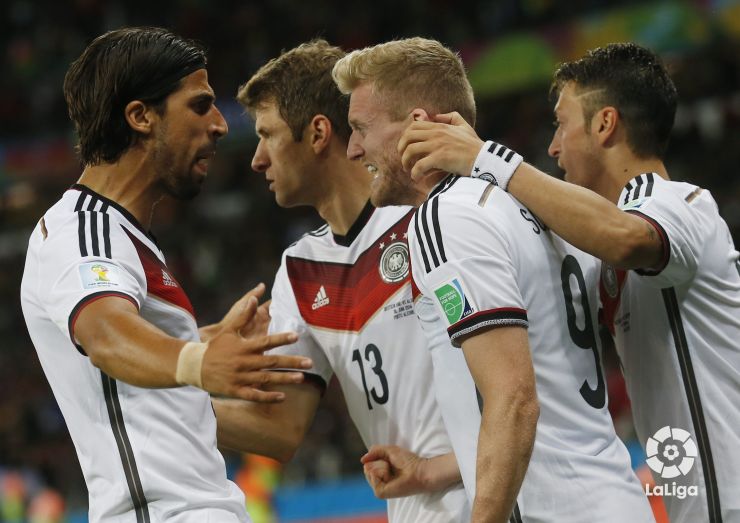 The German side have reached the World Cup semi-finals for the fourth time on the trot and will be bidding to take the title home with them from Brazil.

The FIFA World Cup has been full of surprises. The elimination of some of the powerhouses in the group stages, Costa Rica reaching the quarter finals and the confirmation that Belgium will be a team to look out for in the future have been the highlights of the tournament so far.

Only four teams still have a chance to win the World Cup, whose winner can enjoy four years as the best team in the world, and three of those sides include Liga BBVA players. Sami Khedira, Real Madrid CF’s midfielder, is one of them. The German player is the bastion of Joachim Löw’s team, and he provides the Mannschaft with balance from the centre of the pitch.

In Brazil, the German side has reached its fourth consecutive World Cup semi-final after those of 2002, 2006 and 2010. However, the next step has proved a tough one. In those competitions, the Germans only reached the final in South Korea and Japan, where they lost to Brazil, who subsequently lifted their fifth world title. Twelve years later, destiny has brought the two teams back together for the first time at a major tournament.

Brazil will not be an easy opponent for Khedira and his teammates. Despite missing Neymar and Thiago Silva, the home team will not be lacking motivation as they attempt to reach the final in front of the home crowd and against Germany they will have to prove themselves once more. From the two teams who met in 2002, only German striker Miroslav Klose still pulls on his country’s shirt.

The clash could prove to be a final of sorts. It is the penultimate step to glory in the Maracanã, which would provide the perfect ending to Sami Khedira’s season. The Whites’ number 6 won the Copa del Rey and UEFA Champions League last season, and if he should win the World Cup to boot, 2014 would be a season the German midfielder of Tunisian origins will never forget, despite picking up a serious knee injury early in the season.