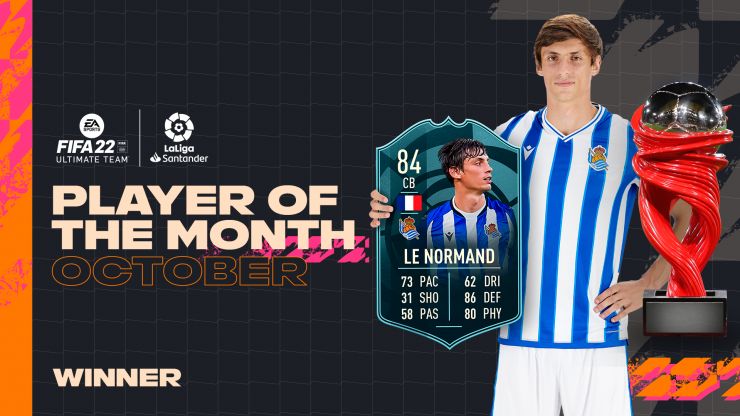 The Real Sociedad defender has scooped up this award on the back of a superb set of performances, playing a key role for the Basque side as they went the whole month undefeated.

Robin Le Normand takes the LaLiga Santander Player of the Month award for October. Real Sociedad’s centre-back has contributed to La Real keeping their place at top of the table, going unbeaten throughout October.

The Txuri-Urdin recorded two wins and three draws last month, enough to keep their spot at the summit of LaLiga. What’s more, the Basques boast an impressive track record in defence this campaign.

Only Athletic Club and Sevilla FC have conceded fewer goals than Real Sociedad so far in this LaLiga Santander season, and Le Normand has played a pivotal role in this defensive solidity. With the Frenchman at the back, his side have kept clean sheets in seven out of 12 games; this speaks volumes of his importance in La Real’s rearguard.

Le Normand follows in the footsteps of fellow countryman Karim Benzema, who picked up this award in September.