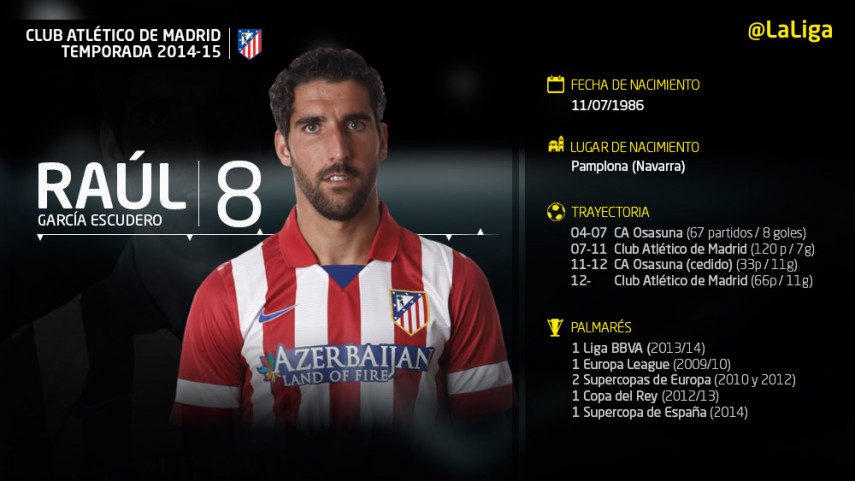 The Rojiblancos player has become one of Simeone's stalwarts and he has scored 15 goals in the last two Liga BBVA campaigns with the Argentinian at the helm.

Raúl García (Navarra, 1986) has managed to change his style of football and become one of the pillars of Diego Pablo Simeone’s team in the process.

A Liga BBVA champion last season, a UEFA Champions League winner and champion of Club Atlético de Madrid's second Supercup of Spain, the midfielder from Navarre has gone from being a stalwart in the Rojiblanco midfield to a member of the strikeforce.

The eye for goal he has developed under the Argentinian coach has taken him on the road to success. Raúl García’s numbers have gone through the roof, as has his effectiveness, since Simeone has been at the helm of the team.

With CA Osasuna and Atlético, before 2012, he had found the net 16 times in 188 Liga BBVA matches, while, since his loan back to the Rojillos and his return to the Vicente Calderón, the player has celebrated a total of 26 goals in 99 championship matches. In other words, he has scored nearly twice the number of goals in half the number of games.

Some of them have been very important too, such as the one he netted against FC Barcelona in El Sadar in 2012 to give his team victory, or the goal in the Mestalla that kept Atlético in the league title race last season.

It is not surprising then, that the Rojiblancos have decided to keep one of their stars until 2018. A player who, as well as a Liga and a Supercup of Spain, has to his name a UEFA Europa League title (2009/10), two European Super Cups (2010 and 2012) and a Copa del Rey against Real Madrid CF in the Estadio Santiago Bernabéu (2012/13) all in one of the most prolific periods in the history of the team from the banks of the Manzanares.

Consistency and hard work can also be counted among the strengths of one of the most experienced players in the Liga BBVA who, after a long career in the game, will finally see another of his dreams come true; representing his country. Vicente del Bosque has called him up for the friendly match between Spain and France in the Stade de France on 4 September. He is without doubt, a new 'commander' among Simeone's red and white crew.