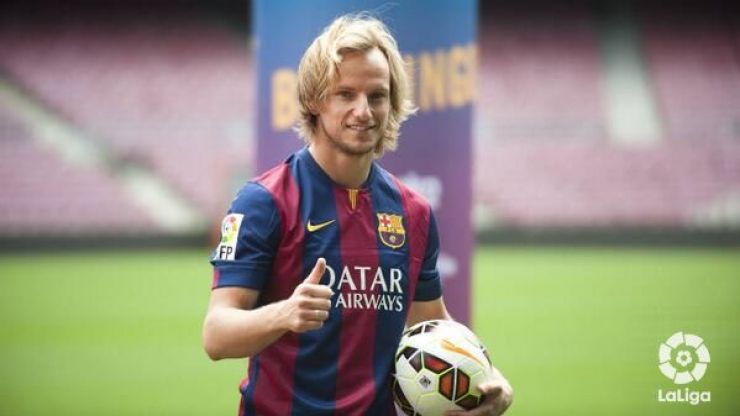 The Croatian player from Sevilla has signed a deal with the Catalan club that ties him to the outfit for the next five seasons.

FC Barcelona continue to make prepare for their 2014/15 campaign. Ivan Rakitić is Barça’s latest purchase after he signed a contract that will keep him at the club for the next five seasons.

Rakitić, who arrives from Sevilla FC, the team he won the UEFA Europa League with, completed one of the best seasons of his career a few weeks ago. In addition, the midfielder was part of the Liga BBVA all-star team and was name player of the championship in January. The two entities have also agreed the loan of FC Barcelona B player Denis Suárez to the Andalusian club.

The midfielder has already pulled on the number 4 Azulgrana shirt. He did so on Tuesday morning, on the turf of the Camp Nou after signing an agreement to play at the Catalan club for the next five seasons. The playmaker, born in Möhlin (Switzerland), was happy and looking forward to a new challenge. "I want to experience history and I want to make more at Barça", he said at his presentation.

Asked about his preference for playing in the middle or in a slightly more attacking role, Rakitić left himself open to both possibilities: "In each position you have to know what the manager expects of you. I’ll try to do my best wherever he plays me". He also spoke of what it’s like to be a player at the club: "The pressure at Barça is always the same, you have to win every match and fight for all the titles".

The Croatian international spoke of his chances of success in Barcelona: "It is up to me, it depends on how I play and if I can return the confidence placed in me". Finally, he wanted to take the opportunity to thank the club for the way they welcomed him during the signing. "Knowing that people are behind you is the most important thing for a player", said the midfielder.