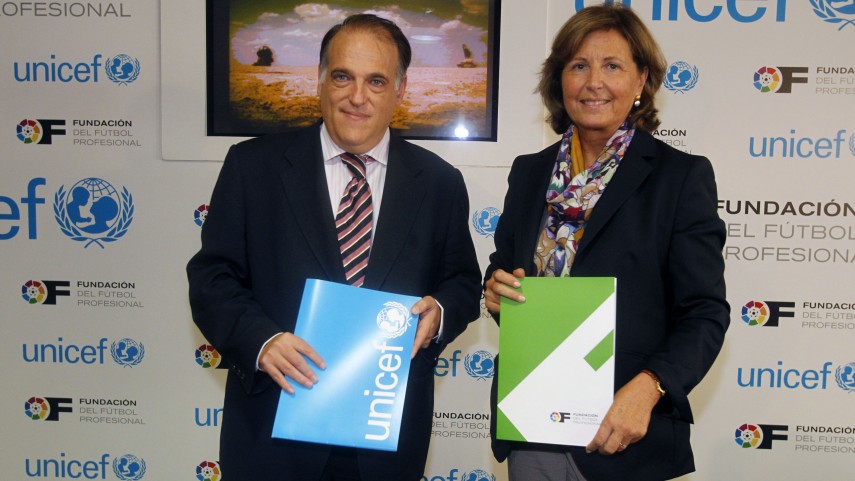 Presentation of the Champions for Life match

The match, which is to be played on the 30th of December, will be presented on Thursday in the Santiago Bernabéu. Javier Tebas, president of the LFP, will attend along with Florentino Pérez (Real Madrid) and Consuelo Crespo (UNICEF).

The event will take place at 13:00 and will be attended by Real Madrid CF president Florentino Pérez, the president of UNICEF Spain, Consuelo Crespo, and the president of the Liga de Fútbol Profesional, Javier Tebas. It will be presented by journalists Lourdes García Campos and Juan Carlos Rivero, and televised by Teledeporte.

As well as being a charity event, Champions for Life is a show that will bring the footballing year to a spectacular end. The match will bring together two Liga de Fútbol Profesional teams who will represent the East and West of Spain. They will be made up of players from LFP clubs in the Liga BBVA and Liga Adelante from those geographical areas. Each club will provide several of its best players for the squad. In order to make the match more attractive, the match will be divided into three 30 minute parts instead of the traditional 45-minute halves. It will be refereed by international referee Velasco Carballo, chosen by FIFA to officiateat theClub World Cup on the 11th of December in Morocco.

Champions for Life is the result of a collaboration agreement signed between UNICEF Spain and the Fundación del Fútbol Profesional for the next three seasons. UNICEF Spain will use the money raised to help vulnerable children, and the LFP, for social programmes through its own foundation.

Ticket collectionTickets purchased remotely can be printed or collected as follows:
Print@home:Print at home.
Mobile:They can be downloaded onto a mobile with the correct applicationsPassbook (Apple) andPasswallet (Android).
Santiago Bernabéu ticket offices:Ticket offices 9, 11 and 12 (available on the day as from 10:00) See location.
Cash machines: Bankia. More details