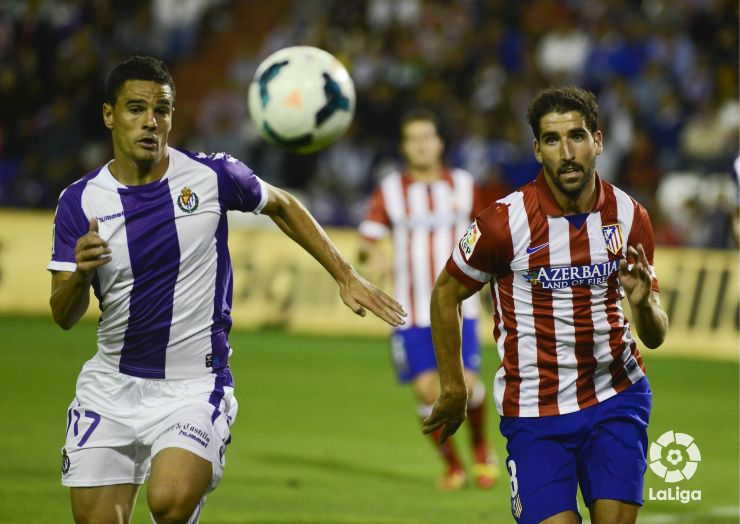 Peña: "We still have a chance on the last day of the season"

The Valladolid left back speaks about his side’s chances against Granada, in what will be a hugely important match with survival in the Spanish topflight to play for.

Carlos González Peña (Salamanca, 28th of July 1983), one of Real Valladolid CF’s most experienced players, spoke with LFP.es about the team’s last Liga BBVA match of the season against Granada CF and also chatted about the pucelanos’ state of mind ahead of this hugely important encounter in which survival in the division is on the line.

LFP.es: After having the result escape you against Real Betis Balompié when you practically had all three points wrapped up, what are spirits in the camp like at the moment?

Peña: We were left with a bad taste in our mouths. We took the lead three times, and the truth is the team was great in attack. We created plenty of chances, had opportunities and scored three goals away from home, which is a very difficult thing to do. But we didn’t know how to control the game. Every time we scored, they’d equalise straight away. In the end it was a coin toss, we went out on the attack thinking that a point wasn’t enough, and although we had some clear chances to score they ended up getting a fourth in injury time.

LFP.es: You scored in the last match. I imagine that in moments like these the more experienced members of the squad like yourself and Javi Guerra also need to pop up to help the team out.

Peña: Yeah, we players who have been in similar situations have to try to use our experience to help the team, but it’s a question of the whole squad putting in the effort. The younger players are equally as motivated. We know it will be difficult but we have to keeping plugging away right until the end.
"This group of players has shown great commitment throughout the year "

LFP.es: Ahead of important matches like this what are the players thinking about?

Peña: Now we need to stop speculating and focus all our efforts on beating Granada or otherwise we won’t be able to forgive ourselves for letting results in other grounds slipping away from us and going down as a result. As such we will try to remain as calm as possible this week in order to prepare for Sunday’s showdown.

LFP.es: How is the team spending this week?

Peña: Anything out of the ordinary is detrimental. This is a week in which we have to focus on training, the work at hand, on making things fun and enjoying ourselves, that way we can relieve the tension. We are training hard in order to be in good shape for this match.

LFP.es: How will you approach this decisive clash with Granada?

Peña: We have to win our match and any time spent thinking about results elsewhere is a waste of energy. We will try to win and then will see if a result somewhere else ends up benefitting us.

LFP.es: What worries you most about Granada?

Peña: Granada is an experienced side that has been through similar situations in other years. They have a lot of quality up front and on the wings. They work really well for each other out wide and have powerful and dangerous men up front. We will have to take the game very seriously, especially in defence, and will need to make the most of the few chances we have.

LFP.es: You will be playing at home, where you have only lost three games. What has made the team so consistent in the Estadio Municipal José Zorrilla?

Peña: We have been strong in the Zorrilla this season, and have played very consistently there. We have been hard to break down and have been top class defensively. It’s a shame we haven’t been about to replicate that away from home. On Sunday, with our fans behind us, we will try to make life difficult for Granada and make the most of our strengths in order to take all three points.

LFP.es: You have had a tough season. There have been a lot of injuries, including that of Patrick Ebert who is a very important player for the team. Have the effects of that been felt during the final stretch of the season?

Peña: Obviously, when you look back on the year we have suffered a lot of setbacks. Óscar González has been out injured for a long time, as has Víctor Pérez, which just adds to the relevance of Ebert’s absence. It has been a tough year as far as staying fit has been concerned. It is not completely in our hands, but we still have a chance on the last day of the season and we’ll fight right until the end. In the case that we do go down it won’t be for a lack of trying.