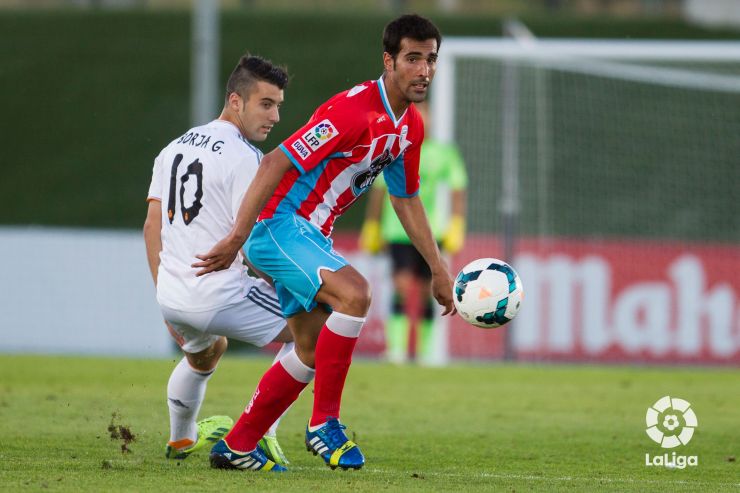 "Our goal is to stay up, not promotion"

Carlos Pita, CD Lugo's midfielder, spoke to LFP.es about the great start to the season of one of the Liga Adelante's surprise packages.

Carlos Pita (8/12/1984, La Coruña) has played football in all the great stadiums of Spain. He knows what it is to play in both the Liga BBVA and the Segunda Division B, and now he is enjoying success in the Liga Adelante, where the Galician outfit is firing on all cylinders in its second season in the division. Something he is reluctant to accept sole responsibility for, saying "it is the fruit of the whole team's hard work".

LFP.es: How is the team after the first half of the season?
Carlos Pita: Overall things are very positive, above all because we are higher up than we were expecting to be. We are playing well and we have put in some good work. The first part of the championship has been very close, but we have managed to position ourselves well and to maintain a considerable distance from the relegation zone.

LFP.es: Which team worries you most as an opponent?
Carlos Pita: The Liga Adelante is so close this season that any opponent is difficult. Anything can happen, but now it gets even trickier, because all the teams are really going to fight until the last.

LFP.es: Lugo has been a real surprise package in the Liga Adelante, had you imagined that you could be fighting for an automatic promotion spot?
Carlos Pita: We would never have imagined it, it is very satisfying. But, evidently, this is none other than the fruit of the work we are putting in.

LFP.es: What does a player feel when they have just been playing in the Segunda B when they see the Liga BBVA so close after four years?
Carlos Pita: Although I have already played in the Liga BBVA and we are close to it in the table, I do not think about promotion. I just watch it on the tele [laughs].

LFP.es: Is promotion a realistic goal?
Carlos Pita: For us it is a bonus to be so high in the table but, realistically, our goal is to stay up, not to win promotion. This is our second season in the Liga Adelante and the idea is to establish the team. That is the most important thing for the club, the players and the city. If we manage to stay up and there are still matches left for something more, we will fight for it, but we want to be realistic.

We have a coach who likes to have the ball and to control possession, he is committed to that style of play and for him it is non-negotiable.

LFP.es: Lugo's secret weapon is its style of football. How does a small team with limited resources pull off such a philosophy?
Carlos Pita: With a lot of hard work and confidence in the coach. We have a coach who likes to have the ball and to control possession, he is committed to that style of play and for him it is non-negotiable. That is the way he understands football and he makes us stick to it even when things are going badly. He has managed to get every one of us on board and, above all, to enjoy working with him.

LFP.es: You are Lugo's playmaker. Do you feel a certain responsibility when you take to the pitch?
Carlos Pita: I don't feel it because I do think I have it. Lugo's strength is in the unit, not any individuals, and everything we achieve is because of everyone's work. Nobody is more important than anyone else and that is also a virtue.

LFP.es: Many consider you 'the brains of the team', are Xavi and Xabi Alonso, the brains of the Liga BBVA, your main role models?
Carlos Pita: I have never had just one role model; I have always liked a lot of players and I really admire Xabi Alonso, Xavi Hernández and Sergio Busquets, three big names in the midfield. When I started playing, I also used to look up to Fernando Redondo.

LFP.es: What does Quique Setién mean to Lugo?
Carlos Pita: He is a very important piece of the puzzle. His footballing philosophy and the style of play he has managed to implement are a true reflection of him as a coach. He likes playing from the back, playing attractive football and he really drives his ideas home. His confidence is essential to all of us.