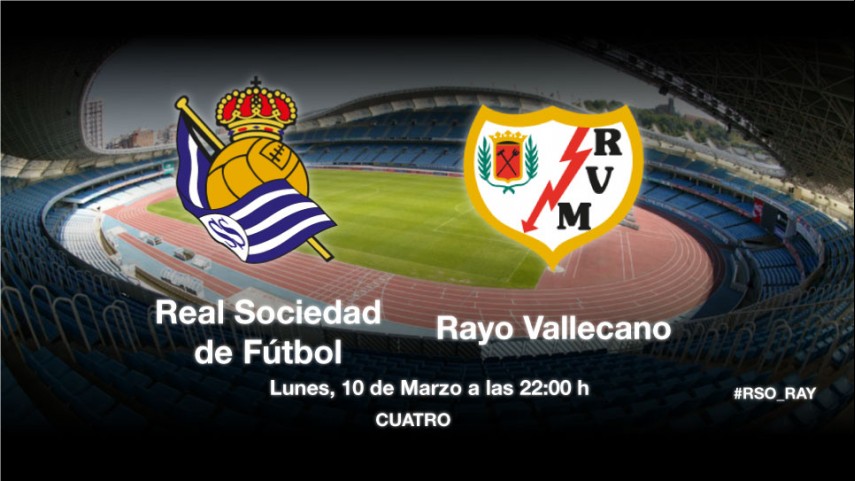 Night of aspirations in the Anoeta

Real will be bidding to move towards fourth place, which offers Champions League football, against a Rayo that is looking to leave the relegation zone.

Real Sociedad de Fútbol and Rayo Vallecano will meet in the final game of the Liga BBVA's matchday 27.

The txuri-urdin will be looking to leapfrog the team above them, Villarreal CF, to move towards the spots that provide UEFA Champions League next season and repeat the dream finish they had last year. Their coach, Jagoba Arrasate, will be without midfielder Esteban Granero, defender Jon Ansotegi and goalkeeper Claudio Bravo, the latter due to a muscle strain. Arrasate spoke of his opponent's improvement in the pre-match press conference: "Rayo has given away a lot less in recent matches", stated the Basque coach.

The Madrid side travels to San Sebastián brimming with confidence after its 1-0 win over Valencia CF last week. Its coach will have to make do without several players for the clash with Real Sociedad. Defenders Leonel Galeano and Tito, midfielder José Carlos and strikers Sebas Fernández and Alberto Perea will all miss the match with injuries, while Roberto Trashorras and Raúl Baena are serving bans. Paco Jémez, the visiting coach, spoke highly of his opponent for Monday: "At Real they work hard and play quality football. I like all of their players and we will have our work cut out", concluded Jémez.