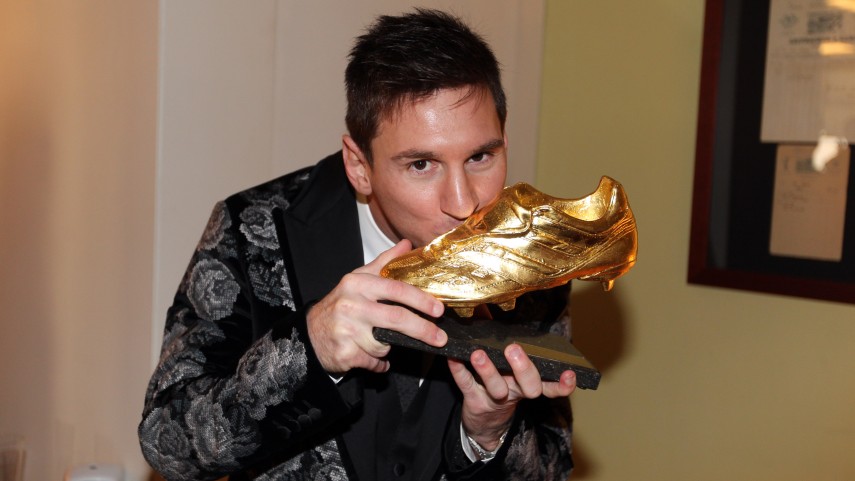 The Argentinian player has received the reward that recognises the top goal-scorer in all European leagues in the 2012/13 season.

FC Barcelona player Lionel Messi was awarded the Golden Shoe this afternoon in recognition of the fact that he scored more goals than anyone else in all European leagues in the 2012/13 season. This is the third time that the Argentinian has picked up the gong, after winning it in 2009/10 and in 2011/12.

The Argentine dedicated his third Golden Boot to his nearest and dearest: "I dedicate this to the people who are always by my side, during good times and bad". Messi didn't forget to mention his teammates, who accompanied him to this emotional ceremony: "Without them I wouldn't have won this or the last two awards. This is recognition for everyone in the dressing room, an award for the whole team".

The azulgrana number 10's 46 goals last season made him the top goal-scorer in the Liga BBVA and also in the whole of Europe notching up 92 points (two are awarded for each goal) in the league to leave behind players like Cristiano Ronaldo (68), Edinson Cavani (58) and Radamel Falcao (56).

Since the 2009/2010 season, when he first won the award, Messi has easily exceeded forty goals in all competitions, averaging nearly one goal per match in all four of the subsequent campaigns.

The prize is awarded by ESM (European Sport Media), a group that manages various publications and is represented in Spain by sports paper Marca. Lionel Messi was presented with the trophy in the Old Estrella Damm Factory in Barcelona, a venue he now knows well after receiving his first two Golden Shoes there.