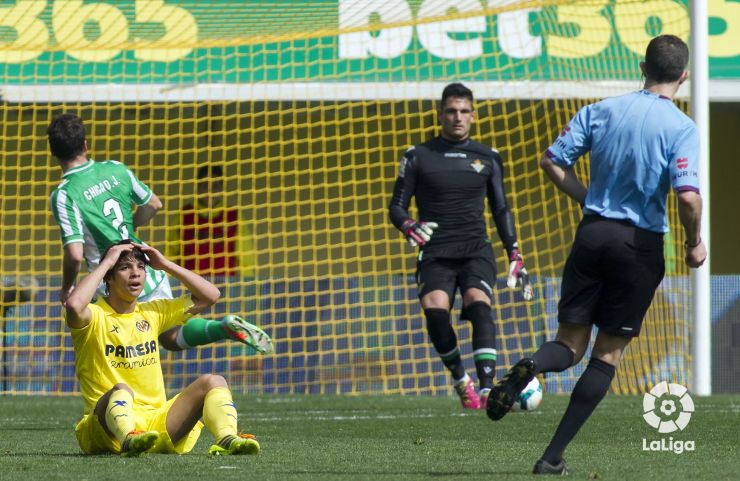 Óliver Torres reveals all to LFP.es and talks about his transfer to Villarreal, how he sees Atlético from a distance and how his new team are approaching the final weeks of the season.

He is just 19 years old and we have heard his name so often in recent seasons that it seems like he has been playing in the Liga BBVA forever. Óliver Torres (b. Navalmoral de la Mata, Cáceres, 10 November 1994), a footballer and journalist in the making, was a product of the Club Atlético de Madrid academy, where he scored the club's fastest goal in the championship, but he is now maturing at Villarreal CF under manager Marcelino García Toral, who he likens to Diego 'Cholo' Simeone: "They're very similar, they both convey aggression and motivation."

LFP.es: What's the first thing you thought when you were told that you were being transferred to Villarreal?
Óliver Torres: How well Villarreal play! That was the first thing that went through my head. When they told me there was a possibility of coming to this team, I didn't hesitate for a moment and we did everything possible to make it happen. There were also team-mates here who I'd played with in the lower age groups for Spain and I knew I'd be happy here.

LFP.es: How have you decided to approach this new period?
Óliver Torres: I am really excited. I am 19 years old and I have a lot to learn. One of the reasons I chose Villarreal was because I knew that Marcelino would teach me a lot. I train every day to earn my place in the team and that is the most important thing at the moment. It is an opportunity and I want to make the most of it, then we'll see what happens.

LFP.es: How did the squad welcome you and what advice have they given you?
Óliver Torres: I arrived with a shoulder injury and, from the start, the whole club tried to make me feel comfortable. Thanks to them it was easy to adapt. They told me not to rush through the injury, that I would have time to play and enjoy myself.

LFP.es: Next up is Athletic, then Valencia and Atlético. You have a tough run… how does the team prepare for the final stage of the season?
Óliver Torres: It is going to be a turning point that will determine the fate of our season, but above all, we are really excited about it. We are going to try and play our game, and try and achieve our goals from there.

"I'm a hard worker, I think I bring drive, desire and energy to Villarreal"

LFP.es: You came from a team where 'El Cholo' has instilled a very clear philosophy. What is the philosophy at Villarreal?
Óliver Torres: The teams are not very different. Marcelino also requires us to be very aggressive, but it is a very similar philosophy. We try to keep the ball and look for space in order to score.

LFP.es: There is a lot at stake for Villarreal in the clash with Athletic. What do you think your weaknesses are?
Óliver Torres: It is a very strong team that gives its all in every match. They are very powerful and have faith in themselves, but we have to focus on our game and play how we know best. Even more so at home, where the fans will help us out.

LFP.es: Despite the fact that the team is having a great season and is in 5th place, it has not been that consistent. What do you think you are missing?
Óliver Torres: In a league as competitive as this, it is very difficult to be consistent, because there are so many great teams. It is true that in recent games we have struggled to be solid, but we work hard every day in order to get back to the positive results we were producing before.

LFP.es: In just one year you have played under El Cholo and Marcelino, two the Liga BBVA's best-known coaches. What are their similarities and differences?
Óliver Torres: They have very similar personalities. Above all in the aggression and motivation they convey to the players. Also, they are both born motivators. As for differences, I don't know if I can think of any! Perhaps Marcelino is a little more relaxed and El Cholo is a bit more feisty.

LFP.es: You are only 19 years old and you have been in Spanish football for several seasons, but you don't seem to feel the pressure. How do you cope with it?
Óliver Torres: I am in an environment that makes things a lot easier to handle. I try to approach and enjoy football like a kid, because the important thing about sport is to have fun. I do not think about what people will say or about the consequences of what I do.

LFP.es: What can you bring to Villarreal?
Óliver Torres: My drive, my desire and my energy. Also, I think the way I play suits the rest of the team.

LFP.es: How would you define yourself as a player?
Óliver Torres: Above all I'm a hard worker. Then, on the field, I would say I always try to be involved with the ball because having the ball is what makes me happy.

LFP.es: Does it make you envious to see Atlético in the quarters of the Champions League and not be there with them?
Óliver Torres: Not envious. I follow them from a distance and have a lot of affection for them and they know they have another fan here at Villarreal. They are working hard and I hope they can achieve something great, except when we play… then I want Villarreal to win.