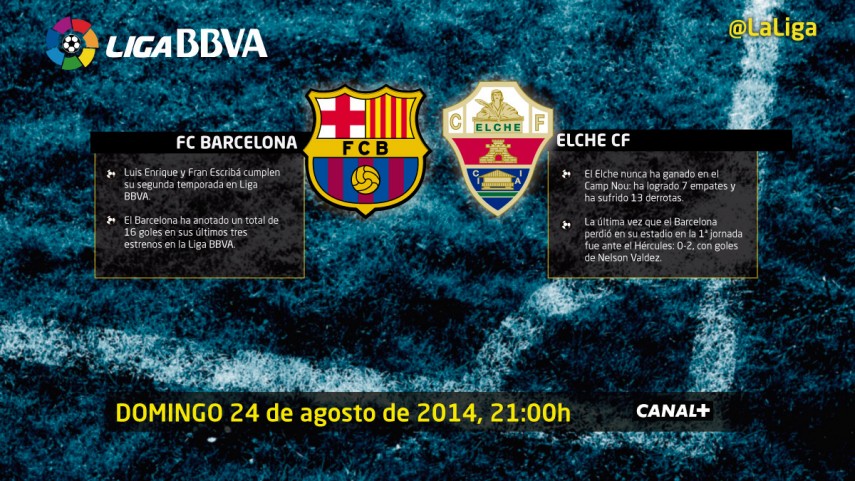 After a fruitless season FC Barcelona start the Liga BBVA hoping to take back the crown in Spanish football. They will do so with a new manager, Luis Enrique, and possible debuts for Jéremy Mathieu and Ivan Rakitić. Meanwhile, Fran Escribá's Elche CF begin their second straight season in the Liga BBVA with lots of new faces: eight Franjiverde players could make their debuts at the Camp Nou.

The Camp Nou side have several absentees (suspended Luis Suárez and the injured Ter Stegen and Thomas Vermaelen), while Neymar and Pedro Rodríguez are last-minute doubts. The Elche manager has selected 18 players in his matchday squad. The club will be without Víctor Rodríguez, Enzo Roco, Anaba and Cristian Herrera who are ineligible for administrative reasons.

Luis Enrique, after a satisfactory season at RC Celta de Vigo, returns to his old club to manage Barcelona in a season full of expectation. "The future can be exciting, but we're concerned with the present, and that's the Elche game. They will pose difficulties for us, because they’re a team that’s tactically very well coached at a defensive level", said the Asturian.

Fran Escribá, meanwhile, talked about how they would stand up to Barcelona. "The aim is not to think about Barcelona. Even so, it's a team that always hurts you and we know we're going to have to work hard. If we're not aggressive and we’re soft like last year, it will be very difficult".