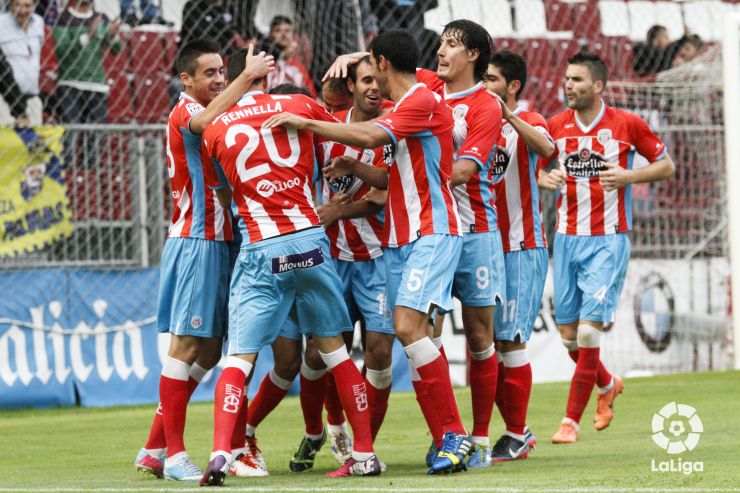 Quique Setién's side is in the automatic Liga BBVA promotion spots for the first time in its history.

CD Lugo is looking to rewrite its history again. The Galicians' impressive start to their third season in the Liga Adelante puts them in the zone that grants automatic promotion to the Liga BBVA, somewhere they have never been before. The Red and Whites' second place has given the fans a reason to dream and it is no surprise that the team's play is yielding results. The outfit's home ground is one of its key assets, with 13 points from a possible 20 and only one defeat in the Ángel Carro.

The team's superlative football is largely thanks to its coach, Quique Setién. The last match against CE Sabadell FC was the manager's 100th in the Liga Adelante and he celebrated it fittingly, with victory number 41. The Santander man's experience in the league has allowed him to build a compact team that is very hard to beat. Despite being in an idyllic situation, Setién refuses to rest on his laurels and prefers to err on the side of caution: "I am not sure if someone is pulling our leg about being in second, because we never even dreamt that this could happen. But we are keep winning points and we are one of a group of teams in a tight pack".

Euphoria has taken hold in Lugo, and for good reason. It is only the second consecutive year in which the Lugo side has played in the Liga Adelante, but in a short time the team has adapted perfectly to the division and it looks like it will be difficult to knock it off the top spots of the table. It is a situation that was unimaginable just a few years ago. But now the team and its fans can dream of greater things.