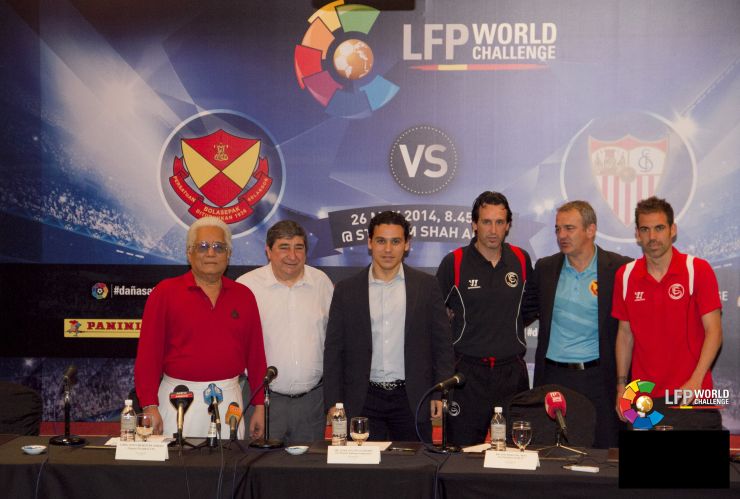 Lendoiro: "It's difficult to achieve more than Spanish football has done this year"

LFP's ambassador on the LFP World Challenge tour gave a press conference together with Sevilla, who will be playing their second match in Kuala Lumpur on Monday.

The Asian Swing of the LFP World Challenge has reached Malaysia. Sevilla FC will be the main attraction once again on this second stop. After a spectacular welcome, representatives of Sevilla José María del Nido Carrasco, Unai Emery and Fernando Navarro, spoke to the press together with Augusto César Lendoiro, the Liga de Fútbol Profesional's ambassador for this event, which is proving to be a huge success.

For Lendoiro, the Liga de Fútbol Profesional's presence in Malaysia will help "improve commercial relations between both countries" and "combine sport with other economic activities". Dato Mokhtar Ahmad, president of the Selangor FA thanked the LFP for their support. "We'd like to learn a lot from them, and want them to teach us all that has made them into the best league in the world", said Mokhtar Ahmad.

This tour has also been rewarding for the Sevilla squad, as Fernando Navarro said. "For us it's a great opportunity to participate as part of the best league in the world", said the Andalusian side's captain. The final date Sevilla have on their LFP World Challenge Tour is on Monday at 19:30h (13:30 Spanish time) against Selangor FA.