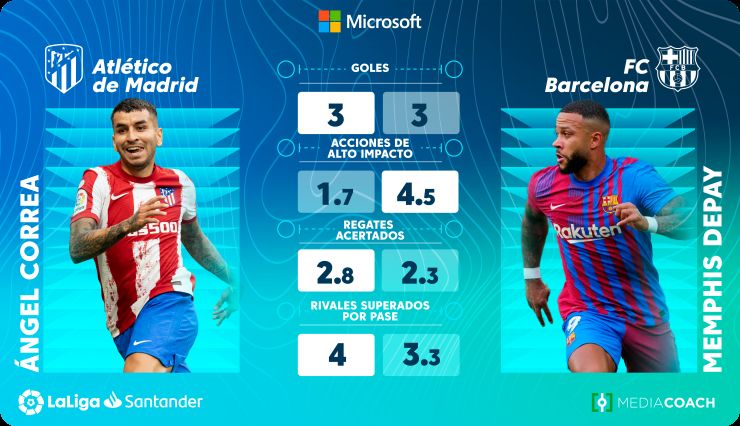 LaLiga and Microsoft have joined forces to launch Beyond Stats, an advanced football statistics initiative involving a fan-facing web portal which will revolutionise the fan experience through big data. With artificial intelligence and machine learning capabilities powered by Microsoft Azure, Beyond Stats surfaces analysis of vast quantities of dynamic matchday statistics from LaLiga Tech’s Mediacoach tool. LaLiga Tech is a specialist technology solutions company that works across the sports and entertainment sector and began operating in 2021 under the LaLiga umbrella.

Beyond Stats is part of LaLiga’s global fan engagement strategy and offers free content and matchday analysis for each LaLiga Santander matchday in both English and Spanish. The Beyond Stats will soon extend to in television broadcasting by highlight metrics throughout the game. In addition to Beyond Stats, LaLiga and Microsoft are leading a visionary transformation of the football industry by jointly developing additional Microsoft-powered applications in the medium and long term.

“The Beyond Stats portal offers us a direct link with supporters and represents a clear step towards a new entertainment era: the interactive integration of the digital experience within the audiovisual environment. Mediacoach is a football analysis platform that has been constantly evolving over the past decade and, thanks to the possibilities offered by Microsoft Azure, we’re now able to offer fans a set of metrics that were previously only available to those directly involved in the industry, such as the clubs themselves. Now, fans can evolve from being passive spectators to active participants in the game,” commented Miguel Angel Leal, director general of LaLiga Tech.

“We’re delighted with the product we’ve achieved with Beyond Stats. It’s so valuable to be able to offer fans around the world the level of detail that is obtained through the application of artificial intelligence and machine learning on the vast amount of data generated during a game. We’ll continue to work alongside LaLiga Tech to pursue further innovations in this field and optimise the advantages offered by the cloud,” noted Rebeca Marciel, enterprise commercial lead at Microsoft Spain.

The new Beyond Stats portal offers far more than the standard metrics that fans typically have access to and captures a huge amount of data, which is generated in real time during every game thanks to the high-resolution fixed perimeter cameras for optical tracking, of which there are up to 19 installed at every LaLiga Santander stadium. These cameras follow the positions of the ball, players and referees and record their positioning with immense accuracy at a breathtaking rate of 25 times a second to yield over 3,500,000 statistics per game.

The next step in the process is for the Mediacoach platform, which is also supported by Microsoft technology, to process the raw data collected by the cameras and manage it with the use of two technologies:

Once the data has been processed by the multidisciplinary team of LaLiga experts via machine learning and artificial intelligence processes, which are powered by Microsoft Azure technology, new algorithms are created that allow for the visualisation of the metrics that supporters are able to access via the Beyond Stats portal.