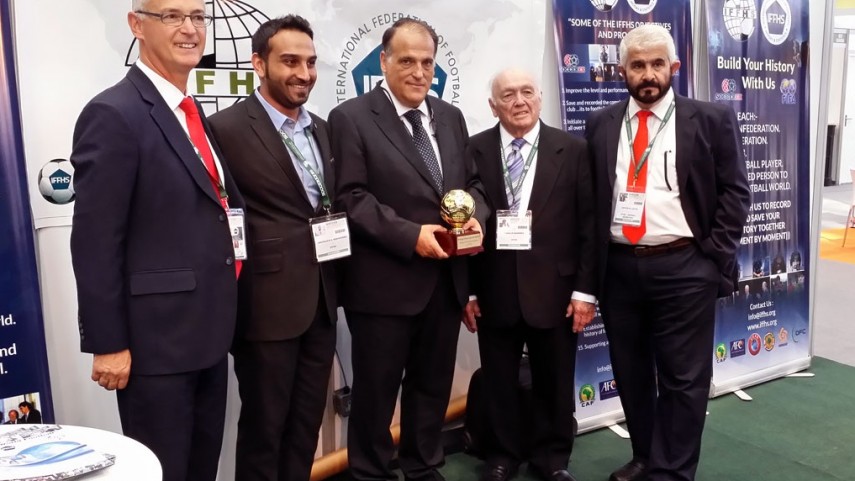 La Liga, the world’s best competition for the fifth year in a row

This prize, awarded by the International Federation of Football History and Statistics (IFFHS), was collected by LFP president Javier Tebas.

At the Soccerex Global Convention in Manchester (England), the Liga de Fútbol Profesional president Javier Tebas picked up the prize that recognises Liga BBVA as the best competition in world football. The prize, awarded by the International Federation of Football History and Statistics (IFFHS), was given to the LFP for the fifth year in a row.

The awarding of the prize was the brooch to the intervention of the LFP in the main Soccerex convention in which Javier Tebas was one of the featured speakers. Under the title “The International Expansion of La Liga”, Tebas outlined the LFP’s lines of work and their future projects.

The director of newspaper Marca, Óscar Campillo, was given the task of interviewing the LFP president during the conference. Tebas reviewed the plans of growth and development in which the LFP are focusing , with special emphasis on the internationalisation of clubs by means of audiovisual growth and a better use of foreign TV rights. In this aspect, Tebas also gave relevance to the Digital Environment Project, which aims to capitalise on the image of La Liga on all existing platforms of communication. Also, the Spaniard spoke about the principal objectives of the LFP World Challenge project.

The LFP president did not forget about Economic Control that has substantially reduced the clubs’ debts, and the development plan of economic and financial transactions with third parties.
The Soccerex Global Convention is the world’s largest footballing business event, at which world leaders of the sport were in attendance, and there were debates, networking and negations carried out.