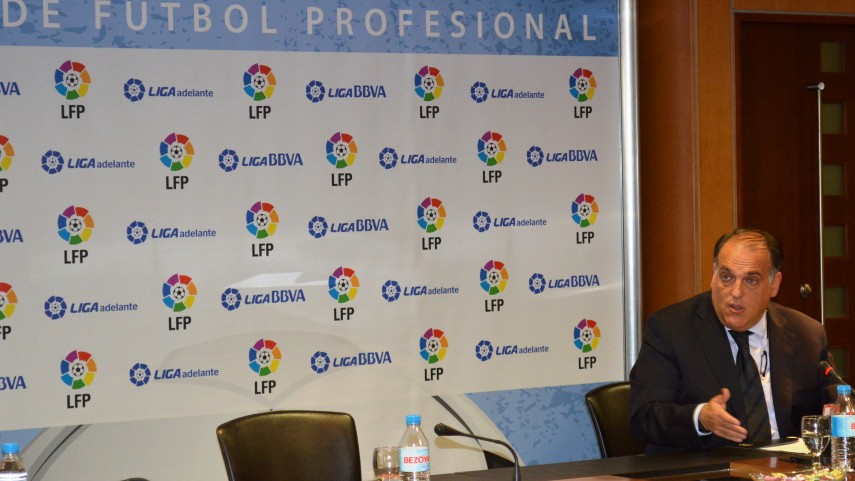 Javier Tebas: "Real Murcia have the right, and the duty, to defend their interests wherever they see fit"

Tebas began by explaining the ratification to deny Real Murcia CF, SAD’s registration. He also confirmed that Real Racing Club have been registered as a Liga Adelante team.

Referring to who will be taking Real Murcia’s place in the Liga Adelante, the president stated that it has been offered to CD Mirandés. "First the documentation work must be completed, but we have no doubt that they will not have any problems with that. During the season, the clubs are assessed financially and Mirandés have shown no signs of financial risk".

On the topic of Real Murcia’s registration denial, Tebas clearly stated: "They have not been registered because they did not meet the economic ratio requirements set out during the LFP Assembly for this season". The LFP president explained how the economic ratio rule was established: "The only pressure the clubs have put on us are that there to be rigorous financial controls so that there is a fair competition".

With regard to today’s protests outside the LFP headquarters by Murcia supporters, he said: "I don’t like these protests. The austerity measures and financial controls are intended to redress the situation clubs currently find themselves in. We would prefer to see a hundred demonstrations like today’s than to change our austerity measures".

With the possibility that the ordinary judicial system could overturn this decision, Tebas was very transparent: "If there is a judicial or administrative body that requires us to change our decision we will do so. Real Murcia have the right, and the duty, to defend their interests wherever they see fit".

Tebas also responded to comments made by the Association of Spanish Football Players (AFE) over the last few days. "The AFE does not like the rules and the economic controls that we have imposed on the LFP. The league is under no obligation to listen to this union regarding this matter. However, the AFE was told months ago that any assistance relating to the financial control measures would be welcomed. The AFE has been aware of Real Zaragoza and Real Murcia’s situations throughout this time. Perhaps the AFE’s duty was to inform the players of this situation beforehand".