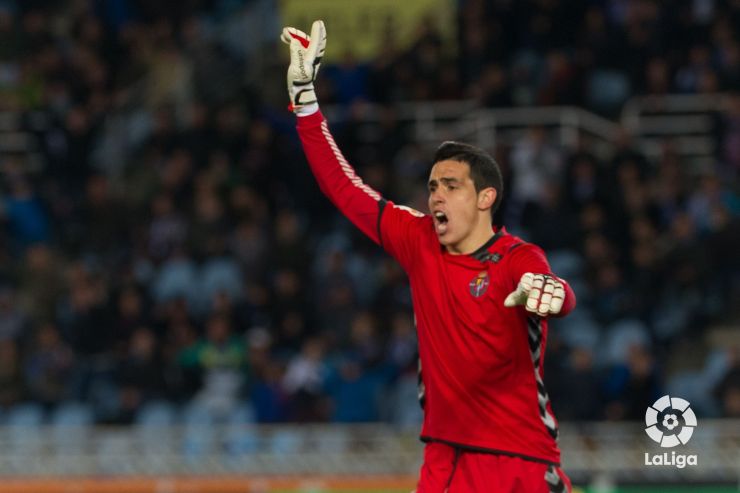 Jaime: "I’m convinced we can stay up"

The Valladolid keeper spoke with LFP.es about their chances of sealing salvation in their last four Liga BBVA games.

Jaime Jiménez Merlo (Valdepeñas, Ciudad Real, 1980) is responsible for defending Real Valladolid CF’s goal in the critical matches that remain for the blanquivioletas in the Liga BBVA. Experience and a long professional career are perhaps his main strengths in his bid to keep his team in the top-flight.

LFP.es: What happened to Valladolid against RC Celta de Vigo?

Jaime: Monday’s match was a blip, where we started off badly and it was nothing like the recent matches where the team had recovered its solidity in defence. The match against Celta was a poor example of the confidence, the quality and the form of this squad. Now we’ve put it behind us, there is no time for regrets, just to fix the mistakes for the next match.

LFP.es: This weekend you host RCD Espanyol. How are you approaching it?

Jaime: Like a final, we have four left and this is the most immediate. We have to approach the match against Espanyol with complete professionalism, focus and calm, without being nervous or feeling the pressure. The team who copes best with it will stay up. Therefore, we have to go out really motivated and with great desire and effort to try and win them and to do that we have to play our best football.

LFP.es: You’ve been on the bench for a large part of the season and now your time has come. Is it difficult to stay competitive when you’re not playing?
Jaime: It depends on the person. In my case I’ve always been very committed to training, taking care of myself and competing. When I’ve had to train and get ready for action, I’ve always been at a good level. This is an unusual season for me, but the important thing here is not me, it’s Valladolid. I just try to get better and help my teammates and the team when I go out to play. Even so, it’s somewhat difficult because of the peculiarity of the position of keeper, but if you are mentally strong you can get there.

"We have to approach the match against Espanyol with complete professionalism, focus and calm, without being nervous or feeling the pressure"

LFP.es: You have to fight for your place in Valladolid’s goal with the young Diego Mariño, how is the upcoming keeper coping with the competitiveness?

Jaime: Only one person can play in goal. Diego is a great keeper, and we have a good relationship. Our battle for the place is a healthy one, the goalkeeper’s position is a tricky one for the coach to choose and the most difficult one to get right. A keeper needs confidence and care in order to keep progressing and to perform well. When Diego plays I respect the manager’s decision because I understand that it must be that way. Now my turn has come and I hope to make the most of it.

LFP.es: What does Juan Ignacio Martínez say to you about the closing stretch of the season?

Jaime: He transmits his calm to us, he wants us to be a team that does not make mistakes and that is solid in defence. He says that we have to go into each match as if it were a final. He tries to motivate us to reach our goal of salvation, a goal that we expect to achieve.

LFP.es: What do you think Valladolid’s Achilles’ heel, and the reason for its current situation, has been this year?

Jaime: The bad start to the season. In the two years I’ve been here we started by winning the first two matches, both in the Liga BBVA and the Liga Adelante. That gives you a cushion and confidence and it gets you going at the start of the season. We’ve also had problems with injuries, and the team has not had the necessary confidence we did in other years. All of that has really hampered our season. Despite an inconsistent year, we’re still alive and our destiny is in our own hands, so I’m convinced we can stay up.

LFP.es: What does Valladolid need to do in order to achieve salvation?

Jaime: I think we need seven points, to win two matches and draw one, so we have to go out and get them. I don’t care what order we do it in, but we want to stay in the Liga BBVA.

LFP.es: Who do you think your rivals for salvation are?

Jaime: UD Almería, Getafe CF, CA Osasuna and Elche CF. All of them, as well as us, are the teams that are in the fight to stay up.