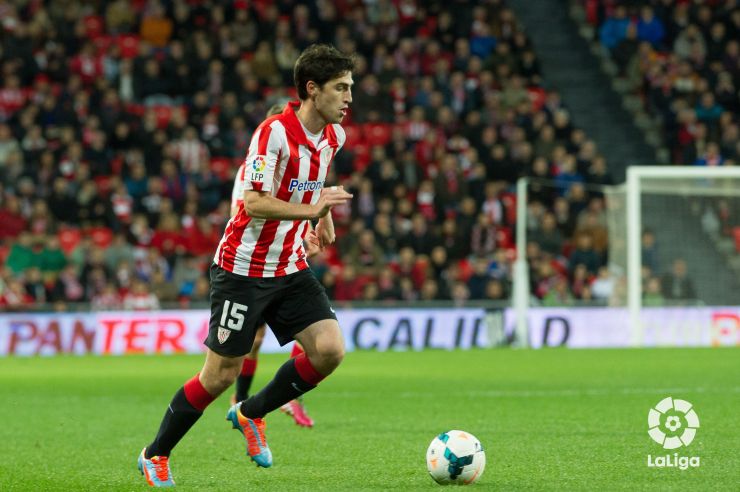 Iraola: "Winning the derby would top off our season"

The Athletic player spoke about the season and analysed the Basque derby for LFP.es after the team sealed their fourth-place finish.

Athletic Club are back in the UEFA Champions League after a 16-year absence. After an excellent season, Ernesto Valverde's men meet one of their arch rivals, Real Sociedad de Fútbol, which promises to be a thrilling clash. Andoni Iraola (Usurbil, 1982) reveals some of the secrets of this Athletic team, which strikes fear into all sides who visit the San Mamés.

LFP.es: Congratulations on fourth place, how would you sum up the season?
Andoni Iraola: It's been fantastic for us. At the start of the season few expected us be here but the team has been really consistent, without any real ups and downs, in the end we got our just deserts.

LFP.es: As you say, at the start of the season you did not know you would go so far, did the team's belief come gradually?
Iraola: Yes, the key was starting the season well despite the change of manager, which can sometimes affect you. We were in the European spots from the start and we've stayed there throughout the season, which is how we were able to seal fourth place so early.

LFP.es: What were the celebrations like in Vallecas?
Iraola: It was a great game. In Vallecas there is always a great atmosphere and a good relationship between the fans. A lot of people travelled to see us and so we were able to celebrate with them.

LFP.es: What do you think is the reason for the success of this Athletic team, which has given the San Mamés so much to celebrate this season?
Iraola: Our matches in San Mamés this season have been one of the keys. We were a little worried about changing stadium, but in the end it could not have been better and we're really comfortable playing at home. Like I said, the team’s consistency has been fundamental.

LFP.es: With the team's objective achieved, is there anything you personally have left to achieve this season?
Iraola: I can't really ask for more. Maybe now the match in San Mamés, which is a derby and we also lost away to them in the first half of the season, a victory in front of our fans would round off the season nicely.

LFP.es: The match you face on Sunday against Real Sociedad promises to be a cracker. How are you approaching the tie?
Iraola: We have achieved our goal this season. It will be a great game that could put round off our season in front of our own fans. It would round off the great year we’ve had. In the San Mamés there is always a great atmosphere and even more so now that we have something to celebrate.

LFP.es: Imanol Agirretxe predicted a 1-2 in his interview with the LFP.es, dare you make a prediction too?
Iraola: If he said 1-2, I’m going to say 2-1. (Laughs)