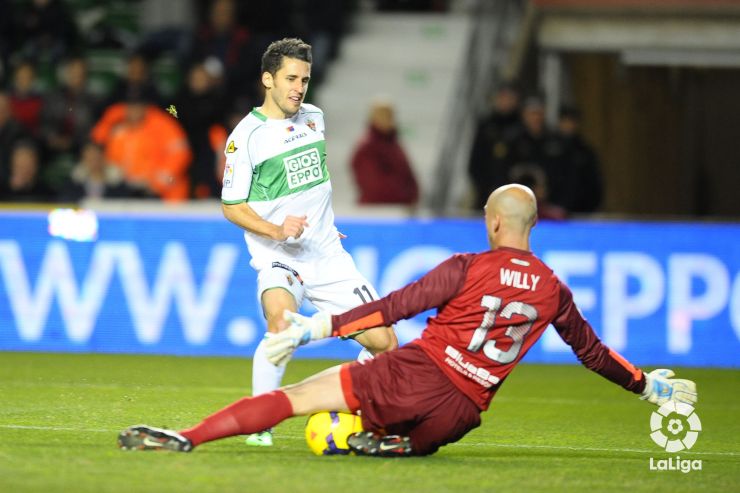 "I will finish playing with either Málaga or Elche"

"When the time comes, I would like to finish my playing career in Spain", Willy Caballero told LFP.es, during a conversation in which he also talked about the current goings on at Málaga.

Willy Caballero is one of the many great Liga BBVA goalkeepers. The 33-year-old Argentine, who celebrated his 100th appearance in the Spanish first division against Barcelona on Sunday, spoke to LFP.es about his past, his future plans and the current goings on at Málaga CF.

LFP.es: Willy, how important is the game against Sevilla?

Willy Caballero: It is a crucial game. We haven’t won for a while now and it is important to avoid slipping towards the bottom of the table. It is not a final, but it is very important. Sevilla plays well and has a lot of top quality players to choose from. Saying that, they have weak points and we need to make the most of them.

LFP.es: After all the changes the club has undergone during your time there, is this season playing out as you expected?

Caballero: No, we were hoping to sit higher in the table, given how well we have done over the past few seasons. The way the Liga BBVA season plays out, sometimes where you sit in the table doesn’t fairly reflect how well you are doing. But that aside, we have to keep competing the same way we have been in the last few games and eventually we will move to the position we deserve.

LFP.es: Is there a big difference between Bernd Schuster and Manuel Pellegrini?

Caballero: Yeah, of course there have been changes. But that’s also the case with players. It is impossible to say that we are stronger with one or the other because there have been big changes to the squad. We are well used to Schuster’s philosophy and have been playing well in the last few games. The only thing we are lacking is goals. We are training really well with Schuster.

LFP.es: What memories do you have of your time with Elche?

Caballero: I have fond memories, from my first match to other big encounters I played with them. Above all else I remember the love from the fans. I returned to play against them recently and was given a great reception.

"We are well used to Schuster’s philosophy and have been playing well in the last few games. The only thing we are lacking is goals"

LFP.es: What does playing in the UEFA Champions League mean to Willy and to Málaga?

Caballero: For me it was a massive achievement, it was a dream of mine from a young age including when I was an academy player. I thought I had to play in it one day. I was an achievement and a big success getting to share the pitch with the big stars. For Málaga the tournament was a big success as we raised the profile of the club.

LFP.es: Does the Liga BBVA have the best goalkeepers in the world?

Caballero: I think there are a lot of hugely talented goalkeepers [here]. Not just Spaniards, but foreigners as well like Thibaut Courtoirs and Keylor Navas. For example, the Spanish national team has the best selection of keepers in the world. They could choose the first, second, third, fourth or fifth choice… They’re all great.

LFP.es: For many goalkeepers the peak of their careers comes after turning 30, why do you think that is?

Caballero: I think it’s to do with amount of matches you’ve played by then. You modify and improve your game, and also become a stronger personality. As a result you inspire more confidence in your teammates. I started playing in the Liga BBVA when I was 29-years-old and have continued to develop since then. I think that from 28 years of age upwards you develop a calm that you don’t have when you’re younger.

LFP.es: Would you like to finish your career with Málaga?

Caballero: I’m not thinking about retiring yet, although I would like to finish up in Spain. With that in mind, I’d like to finish with either Málaga or Elche, the two clubs that opened the doors for me. But the life of a footballer is full of surprises. I live in the here and now.

LFP.es: Finally, why is Willy not in the Argentina World Cup squad?

Caballero: I don’t have an answer for that. Without a doubt I’d like to be there. I am happy that the level I’ve been playing at over the last few years makes joining up with the team feel like a realistic possibility. What I need to do is stay on the same track. I feel content knowing that I am doing my best right up until the end.