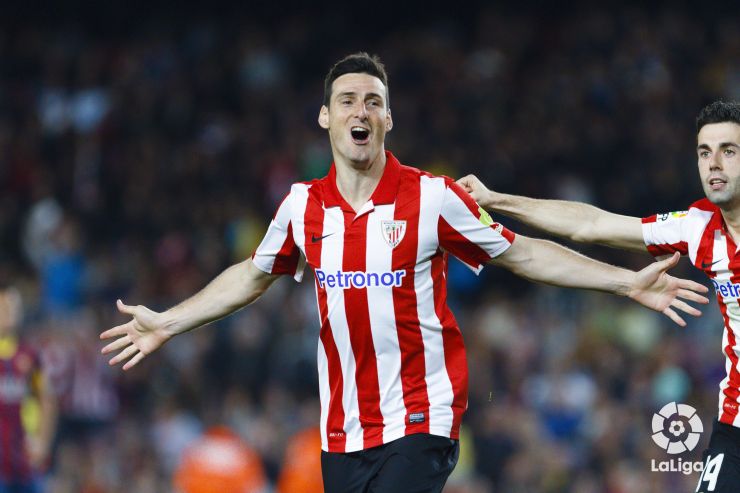 "I hope my most special goal is yet to come"

With fourth place at stake, Athletic striker Aritz Aduriz discussed the final stretch of the championship and his current spell of form with LFP.es.

Athletic Club are approaching one of the most important moments of the season. The rojiblancos are looking to seal their fourth place as soon as possible and one of the most in form strikers in the Liga BBVA is on hand to help them out. With 16 goals so far this season, Aritz Aduriz (San Sebastian, 1981) has become a game-changing player for the Basque outfit. The striker from Donostia has scored nine of the team's last 13 goals, giving Ernesto Valverde's men some invaluable points that could help them on the way to fulfilling their UEFA Champions League dream.

LFP.es: Would you agree that you are in the midst of the one of the best moments of your career?

Aritz Aduriz: You always want to improve as much as possible. Looking back I don't know if it is my best moment, but it's certainly one of them. It is also difficult to measure your own progress in a team sport. If I'm doing well, that's a reflection of the fact that the team is doing well.

LFP.es: Against FC Barcelona you played your 150th match for the rojiblancos and you have scored more than 50 goals, stats that mean you will go down in the club's history. What does that mean to you?

Aduriz: Athletic is hugely important in my life and it makes me proud. It's where I've always wanted to play and it's very satisfying to keep racking up games. It makes me want more and to keep playing in more matches.

LFP.es: What is the most special goal you have scored with the rojiblancos?

Aduriz: To be honest, I hope that it is still to come and that it will be something important.

LFP.es: Individually you are currently playing some of your best football, and that shows in the team. What is the secret to this Athletic?

Aduriz: In order for a team to have a season such as the one we're having, a lot of factors have to come together. On a human level, we have a sensational group with a team spirit that is difficult to find elsewhere. In a way, we're all from here, we can all identify with this club and that makes it a very consistent and solid group. Technically speaking, we also have a quality team, so things are going well.

LFP.es: What is it about the new San Mamés that makes you so strong at home?

Aduriz: It's the essence of San Mamés. Things are going great in the new ground and also, the crowds are still the same. The fans really lift us and it makes a difference.

LFP.es: Would you rather have the impenetrable nature of the new ground or the spirit of the old one?

Aduriz: Can I have them both? The old San Mamés is a historic ground where we had some unique experiences on the pitch that are difficult to forget. The new one is spectacular and it is what Athletic deserves.

LFP.es: The work of Ernesto Valverde, who is very familiar with the club and its philosophy, has borne fruit. What is he like to work for?

Aduriz: It's very comfortable because he makes things simple for you and he makes sure we enjoy ourselves day to day. He's a great coach who demands an awful lot. Technically speaking, he approaches each match very well and he knows how to read every game. All of these things together make him the great coach that he is.

LFP.es: In fourth place since December, the team is vying for a Champions League place. How are you approaching this final stretch?

Aduriz: We're really excited. We have a clear goal and that is to seal fourth place, which we've been defending for a long time. There are four crucial matches to go, starting on Sunday against Sevilla FC.

LFP.es: How are you approaching that critical game?

Aduriz: The match against Sevilla is not a final because it is not the end of the championship for us, but almost. We are facing our closest rival who we are three points ahead of and it is fundamental to win that game.

Aduriz: My dream is to win a title with Athletic. I'd like to start off by qualifying for the Champions League, we're very excited about that. But, as I said, my greatest wish is to win a title and to be able to celebrate it on the barge.