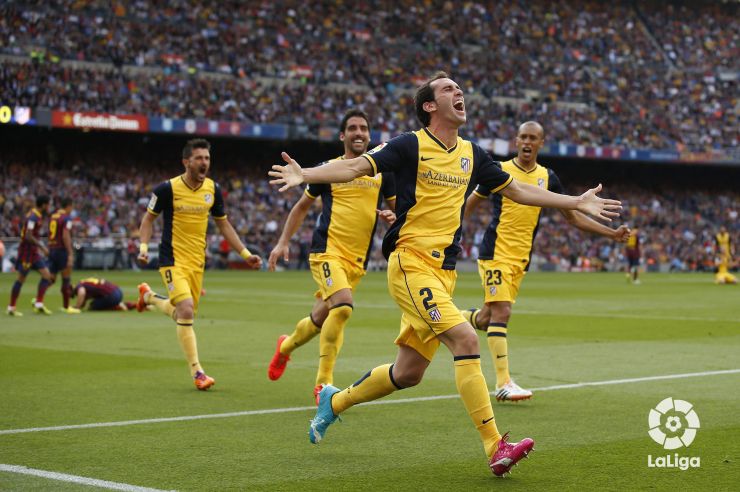 Simeone's side managed to get over the injuries suffered by Costa and Arda in order to get a draw that earned them their tenth Liga BBVA title after a thrilling evening of football in the Camp Nou.

After suffering the unthinkable early on, Club Atlético de Madrid won their tenth Liga BBVA title by rescuing a point against FC Barcelona in the Camp Nou in match that had everything.

With very few changes to the starting line ups, the biggest of which was Gerardo Martino's inclusion of Gerard Piqué to the Barca back line, the title-deciding Liga BBVA matchday 38 clash got underway.

Nerves got the better of both sides at the beginning of the encounter and it did not take long for misfortune to strike down two of Atlético's star men. Diego Costa and Arda Turan both had to come off with injuries during the first 20 minutes of the match, but despite the setback, Diego Simeone's players continued to compete.

However, Alexis Sánchez popped up in the 34th minute with a screamer on his right foot to make it 1-0 and put Barça in the driving seat towards the title. The goal allowed the Catalans to control the play for the rest of the first half against an Atlético side that had the wind knocked out of it. But the team from the Spanish capital regained its fighting spirit for the beginning of the second half. In the 46th minute David Villa hit a shot against the post, and just four minutes after that Diego Godín made it 1-1 with a fantastic header from a corner kick.

The rest of the second half was a display of character and sacrifice from the visiting team. Martino decided to bring on Neymar to improve their chances and the Brazilian gave the Catalan attack more bite. Lionel Messi also showed flashes but the heroic Atlético resistance kept the score level until the final whistle to earn them their tenth Liga title.