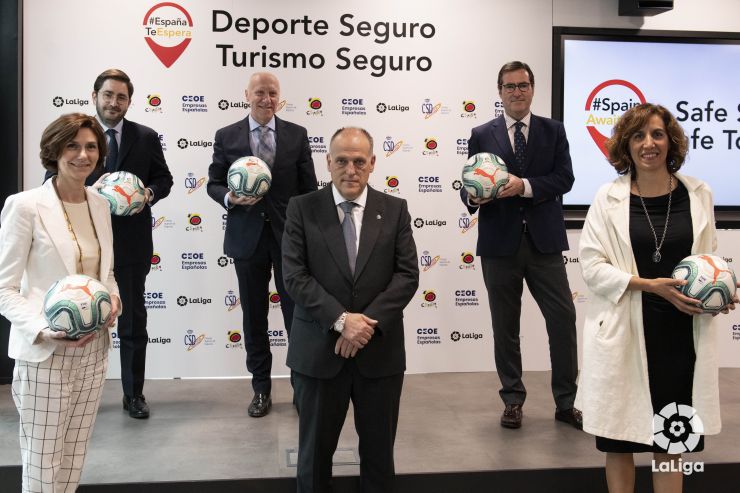 The Spanish Government, LaLiga and CEOE will promote Spain as a destination for safe sport and tourism

The Spanish government, LaLiga and the Confederation of Employers and Industries of Spain (CEOE) have come together in a bid to boost and promote Spain as a safe destination for tourism and sport in a campaign that will be given considerable visibility domestically and internationally over the remaining 11 rounds of fixtures in LaLiga Santander and LaLiga SmartBank.

It is a joint campaign by the Ministry of Industry, Trade and Tourism (via Turespaña), the Spanish Ministry of Culture and Sport (via CSD – Spanish High Council for Sport) Ministry of Health, the CEOE and LaLiga to boost the tourism and sports industries in Spain, which are both so crucial to the economy and have suffered over the last few months during the COVID-19 pandemic.

LaLiga is very aware of the opportunity and responsibility that it has as an entertainment platform that reaches over 2.7 billion people globally, which is why it will be fully supporting this initiative, whose visibility will be boosted further by a specially created logo.

LaLiga will give global visibility to the campaign through a logo that will be seen on the competition’s international broadcasts, as well as through creative pieces and posts on its social media networks (on which it has over 100 million followers), region-specific virtual perimeter advertising boards, virtualization of stadiums and digital marketing strategies, among other initiatives.

“Spain is ready to safely welcome international tourists from 1 July. We have thoroughly prepared to ensure we guarantee the highest safety standards across our whole tourism industry by rolling out over 20 uniform protocols for the entire country. We want tourists to feel confident and we are sending out a very clear message that will be amplified by this campaign: Spain is waiting for you,” said Oliver, the Secretary of State for Tourism.

CSD president Lozano said that she is aware of the effort that LaLiga has put in to ensure the competition can return safely and added that it is “time to savour the restart. A safe return has been outlined, in accordance with a protocol that will allow the competition to start up again successfully. Everyone should know about the effort that we have put in. We know that there’s no such thing as a zero risk but all of us, with our footballers leading the way, are giving our absolute best and acting responsibly and sensibly to ensure everything goes well.”

LaLiga President Tebas admitted that he feels “immensely proud that professional football can keep helping boost Spain’s visibility beyond our borders and help the country’s economy. Football and LaLiga play a key role in promoting Spain all over the world, which is why it’s so important for us to be part of this project now. At LaLiga, we’re going to do everything in our power for Spain to come out of this situation as quickly as possible.”

CEOE President Garamendi spoke about how the campaign “is an unbeatable example of how the public and private sectors can act as one to bring a country together. During such difficult times, supporting Spain as a safe destination and showcasing the pairing of tourism and sport is everyone's responsibility and, at the new CEOE, we’re going to keep working hard so that the authorities and businesses can come through this crisis together and build a better Spain that will benefit us all.”

The tourism industry is vital to Spain. It makes up 12.3% of the country’s GDP and employs 12.7% of the total number of people signed up for social security. There is no other sector that generates so much employment and, at the same time, is a tool for social cohesion, economic development, and population retention. It is also a transversal sector that has a multiplier effect in other parts of the economy, such as trade and transport. Spain is a leading global tourist destination, has been the most competitive country in the world since 2015, according to the World Economic Forum, and is second-ranked in terms of the number of international visitors and tourism expenditure.

Spanish sport is one of the drivers of Spain’s good reputation abroad because of the level of professionalism and impressive results achieved in terms of management and sporting talent. The considerable financial impact is seen by the fact that several studies have calculated that it makes up 2% of GDP and almost 2.5% of direct, indirect and induced jobs in Spain (Funcas, The Growing Role of Sport in the Economy and Society, 2019).

LaLiga has been working hard to promote Spain for many years. In 2018, it was named an honorary ambassador of the Spain Brand in the international relations category “because of its contribution to portraying a positive image of Spain the world over through football” and “helping Spanish companies and sportspeople with the internationalisation process.”

LaLiga is also working in tandem with its sponsors to promote and support tourism. Banco Santander is a clear example of this, with their “La Remontada” campaign that seeks to reactivate businesses, consumption and tourism in Spain, reflecting values such as hard work, perseverance and confidence to overcome adversity, all essential character traits of Santander Ambassador Rafa Nadal.