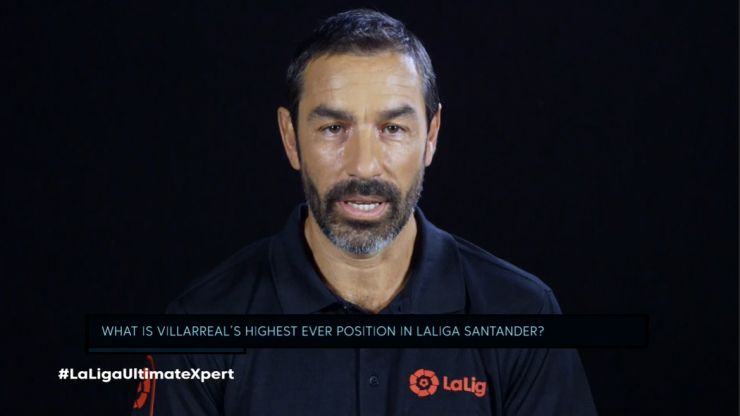 Have you brushed up on your Villarreal knowledge? Robert Pires and LaLiga's Ultimate Xpert are about to put it to the test

The former Villarreal player and current LaLiga ambassador steps up for Matchday 33 in LaLiga's Ultimate Xpert to surprise us with the question which he has prepared for all those who think they know everything there is to know about the Yellow Submarine.

The question focuses on figuring out what the club's highest ever finish is in the competition, but would you still be able to come up with the right answer if the club were referred to with this particular nickname? The Yellow Submarine refers to the well-known Beatles song, given that the tune rang out on the terraces during the 1967/68 season, coinciding the club's promotion to the Tercera Division, Spain’s fourth tier.

Later on, when the club became part of the footballing elite, they changed from wearing their yellow shirt with blue trim and blue shorts to all yellow in honour of their nickname.

Thanks to the superb campaigns being run by LaLiga Santander's international broadcasters, we are convinced that this trivia about Villarreal will infiltrate every corner of the globe and thousands of fans will respond to the video-question. In fact, we have already accumulated over 100,000 participants so far in the contest.

On this occasion, we would like to highlight the campaign of Israeli broadcaster ONE. In each post about LaLiga's Ultimate Xpert promoted on their Instagram, Facebook and TikTok channels, in addition to answering the video-question, they ask users to reveal a piece of information that only they know about the club in question. The user with the most original response wins a fantastic LaLiga Santander club shirt and a Puma ball.

In addition to promoting the contest on social media, ONE Israel is seeking to give it as much visibility as possible by launching a promotional spot for the campaign and the question of the week on its TV channels during the selected match's half-time interval and at full time. These actions are producing some outstanding results.

Meanwhile, the Romanian broadcaster Digi Sport has opted for a campaign with a quiz in which the questions are promoted on their “European Football” TV programme and on Facebook, where subscribers must submit their answers. This way, the campaign brings together traditional and digital media to reach a wider audience.

Some of the broadcasters have already posted the question about Villarreal CF on their social media channels and we leave you with links to their posts: