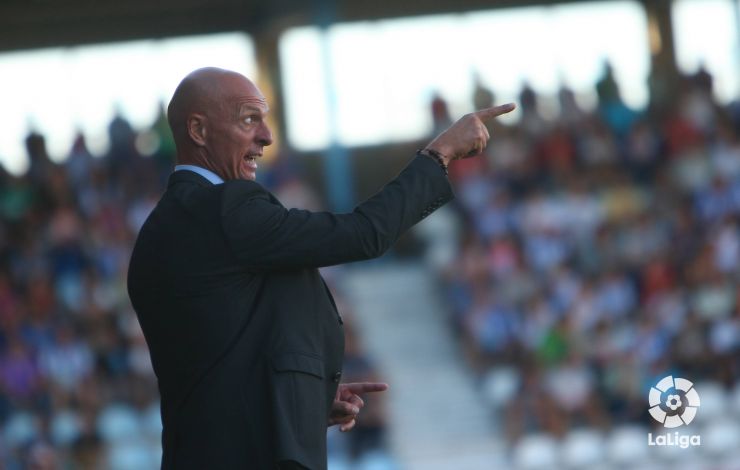 "Hard work is the best guarantee for any manager"

LFP.es speaks with the Sabadell coach, Miquel Olmo, to get his thoughts on the season, his team's change of attitude and the second half of the Liga Adelante campaign.

Miquel Olmo (Terrassa, Barcelona, 20th of January 1966) is one of the most widely talked about managers in the Liga Adelante. The Catalan coach took charge of Sabadell FC during a complicated period for the club and now, under his tutelage, the team finds itself near the top of the 2013/14 Liga Adelante table.

LFP.es: Since your arrival, Sabadell has turned a new leaf in the Liga Adelante. What do you put this down to?

Miquel Olmo: We had a very short amount of time to work with so we tried to transmit the idea of a style of football suited to the team’s abilities. Getting the players to buy into our idea was the best way for us to get a reaction out of the squad, which had found itself in a position it didn’t deserve to be in. I have tried building their confidence while working them hard. As a coach, hard work is the best guarantee you can have.

LFP.es: When you were named as successor to Javier Salamero it was supposed to be a temporary arrangement. How did you approach that situation and then manage to stay on at the club?

Olmo: I approached it with the same mentality I have now, taking each day as it came and enjoying every minute. I couldn’t think about it another way, so I enjoyed each training session with my players and every question I was asked. The difficult thing about football is that the players position themselves, and that’s what they did. They gave me a response during the training sessions and during competitive fixtures. Players are the judges of coaches on a day-to-day basis, how you train them and how you manage the squad.

"I lived the day-to-day the same way I do now. What gives us good results is always trying to improve on yesterday’s performance"

LFP.es: You are an expert on Catalan football. Do you another club from the region playing in the Liga BBVA next season alongside Barcelona and RCD Espanyol?

LFP.es: In your opinion, why is it that the Liga Adelante is so competitive this season?

Olmo: Now there is very little between the teams. There are seven points separating the sides in the play-off places and the sides in the relegation zone. I can’t remember a tighter Liga Adelante campaign. Usually the difference in points is insurmountable, but this year that’s not the case. That says a lot about how evenly matched the Liga Adelante is, which is a great and exciting thing.

Olmo: Our next challenge is Deportivo de La Coruña. We’ll face Depor, and all the difficulties they can pose for us, but with the excitement of a side looking to surprise the opposition and continue to improve day by day.

LFP.es: The next match is against the Liga Adelante leader. Is this a good time to reacquaint yourselves with your good away form?

Olmo: We approach every game with the idea of winning it. If we approached it any other way, it would be a lot easier for the result to go against us. Deportivo makes the most of the goals it scores, and the teams that manage that are the ones fighting for promotion.

LFP.es: Sabadell has scored 29 goals this season, eight of which have come from defenders. What is the secret behind the team getting so many goals from the backline?

Olmo: We have the tendency to attack and defend as a unit. We have players who are very adept at good dead situations, our centre backs are strong in the air and our players overlap well and get into good positions. Our footballing philosophy requires the contribution from the midfielders and defenders. We all attack and defend.