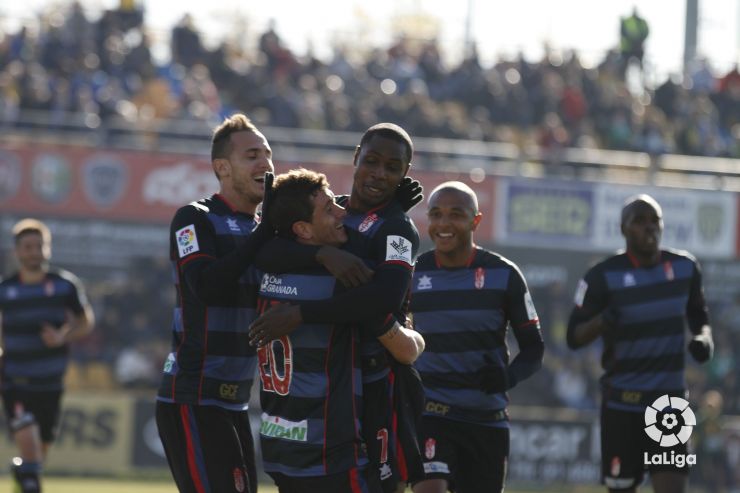 Granada and Almería close to advancing

The two Liga BBVA sides comfortably saw off Alcorcón and Las Palmas respectively in the first leg of their Copa del Rey fourth round ties.

On the final day of the first legs in the fourth round of the Copa del Rey there were two sides who looked to have sealed their place in the next round with victories away from home. Granada CF and UD Almería beat Liga Adelante sides AD Alcorcón (0-2) and UD Las Palmas (1-3) respectively. In the tie which pitted two Liga BBVA sides against each other there was excitement aplenty as Málaga CF threw away a 3-0 lead against CA Osasuna to draw 3-3, whilst RCD Espanyol drew 2-2 away to Real Jaén CF and Valencia were held to a goalless draw by Gimnàstic de Tarragona.

A double from Odion Ighalo, with one goal in each half, saw Granada down a brave Alcorcón side 0-2. Almería also came away with a similar result from Las Palmas. After 25 minutes they lead 0-3 due to an Óscar Díaz brace, one of which was scored from the penalty spot, and another from Aleix Vidal who took advantage of a defensive mix up by Sergio Lobera's side. Nauzet Alemán scored a free kick for the home side to ensure the game finished 1-3.

In the tie between two Liga BBVA sides, Málaga drew 3-3 with Osasuna, throwing away a 3-0 lead. Vitorino Atunes helped create the first and scored the second with a spectacular free kick. Juanmi Jiménez extended the lead following the break, however two goals from Roberto Torres and Manu Onwu in four minutes (57 and 61) put the frightners on the Andalusian side, and Emiliano Armenteros evened things up 12 minutes from time.

Espanyol drew 2-2 with Jaén. David López put Javier Aguirre's side ahead just before half time, however a Sidnei own goal and Jozabed strike turned the match on its head, before Uruguay international Christian Stuani headed in an equaliser in the 88th minute to keep the Catalan side in the tie. Valencia couldn't find a way though on their visit to Segunda B side Nàstic, who saw a David Rocha effort hit the woodwork in the first half.