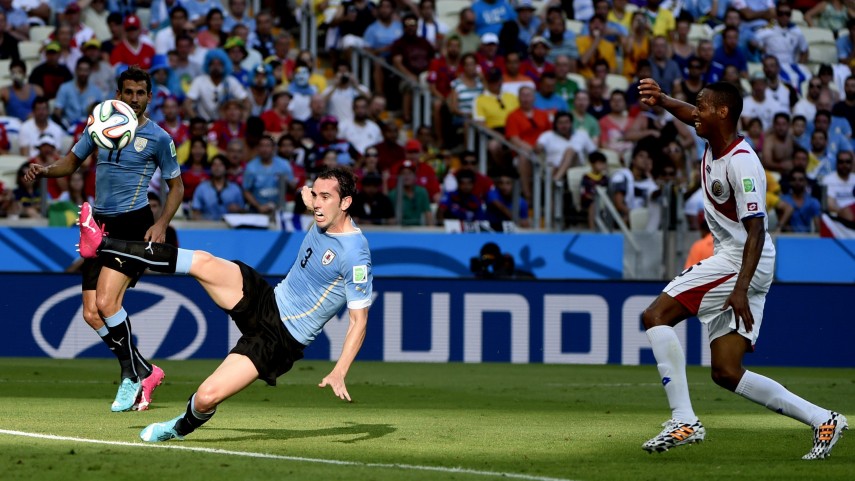 Godín, the stalwart of a hurting Uruguay

The centre-back, a Liga BBVA champion with Atlético de Madrid, comes into the second group match hoping to get his team back on track after the debacle against Costa Rica.

The future of the teams in the 2014 FIFA World Cup is starting to take shape after the first round of group matches. One of them is the Uruguay of Diego Godín and Cristian 'Cebolla' Rodríguez, two champions of the Liga BBVA 2013/14 with Club Atlético de Madrid who must now beat England to stay on in the competition.

Godín is, together with a Diego Lugano, the stalwart of his national defence in Brazil. A season in charge of the rear-guard with Atlético in the Spanish competition gives him the experience he will need to stop the English in a complicated clash. The stumble in the first match against a tricky Costa Rica (1-3) was a setback for the side managed by Óscar Washington Tabárez. The only way they can progress now is with a victory.

Rediscovering their solidity against the Three Lions is vital and Godín is a key member of the Uruguayan defensive structure. His 34 matches, all of them as a starter in the best team in the Liga BBVA last season, would suggest that he has what it takes to help his team stay on in Brazil beyond the group stage after a successful campaign four years ago in South Africa, where he finished fourth with his country.

An international player since 2005, clashes of this kind are nothing new to the Rosario-born footballer. He has played in two Copa Americas (2007 and 2011), a tournament he won three years ago in Argentina, two World Cups and a Confederations Cup. The centre-back does not shy away from a challenge and his next match could mark a turning point in his team’s campaign at the World Cup in Brazil.

But Godín is not Uruguay's only representative of the Liga BBVA. Rodríguez, also a Liga BBVA champion with Atlético, and striker Christian Stuani will provide their coach with a wide array of skills. The former will seek to damage the English side on the left wing with his pace and drive, while the latter’s ability to beat a man and his prowess in the air will be one just some of the weapons in a team with a spectacular strike-force. Uruguay must win.