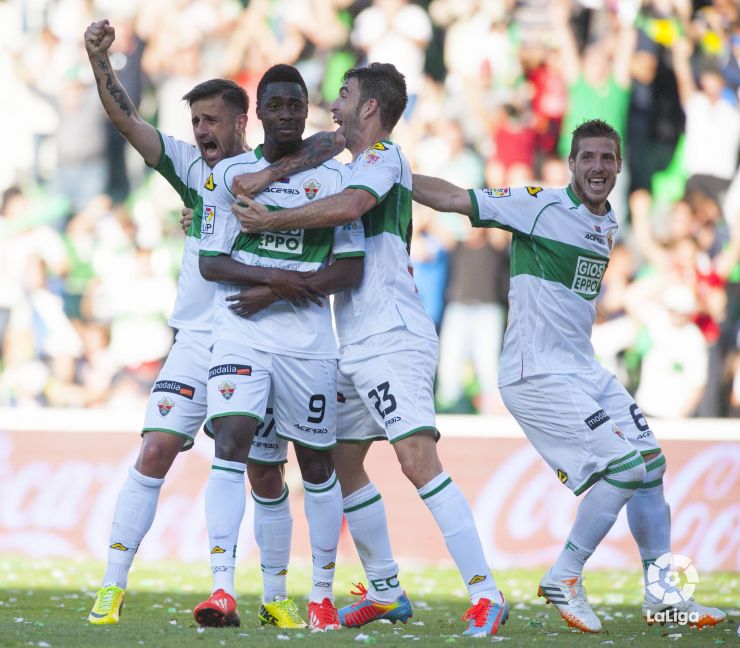 Fulfilling objectives in the Martínez Valero

Fran Escribá’s Elche have made 2014 their year after stringing together eight undefeated matches at home in the Liga BBVA.

It had been 24 years since Elche CF and the Martínez Valero stadium had enjoyed Liga BBVA football. However, after a process of adaptation in the competition, 2014 has been a practically immaculate year for Fran Escribá’s team at home.

Eight matches have gone by since Elche were last beaten in front of their own fans. The last team to take three points home from franquiverde territory was Bernd Schuster’s Málaga CF who beat Escribá’s men 1-0 on the 20th of December 2013 with a lone goal from Ignacio Camacho at the start of the match. But the new year has brought with it the joy of victories and goals that have allowed the fans to dream of salvation on its first year back in the Liga BBVA.

The first team to take to the Martínez Valero in 2014 was Sevilla FC. Unai Emery’s men could only muster a draw (1-1) in an excitement-packed clash that was decided with eight minutes to go. That match was followed by games with two direct rivals in the battle for salvation, Rayo Vallecano (2-0) and UD Almería (1-0), who were seen off by Elche before CA Osasuna produced a goalless draw (0-0).

One of the season’s sensations, Carles Gil, was the hero of the game against RC Celta de Vigo on matchday 26 of the competition after scoring in his team’s victory (1-0). In the following clashes, Real Betis Balompié (0-0) and Athletic Club (0-0), a close rival and a team who are bidding for a place in Europe next season, could only take a point home from their visit to Alicante before the elixir of football returned to their stadium.

Elche’s latest victim was Getafe CF, on matchday 32 of the Liga BBVA (1-0). A late goal from Richmond Boakye erupted the stands and took the team a little closer to its objective of salvation, which is now just seven points away.

In total, Fran Escribá’s team have collected 16 of the last 24 points on offer at home, only conceding one goal in 8 matches, figures that have the two-time Liga Adelante champions well on their way to another season in the Liga BBVA. Elche’s objectives are being fulfilled in the Martínez Valero.