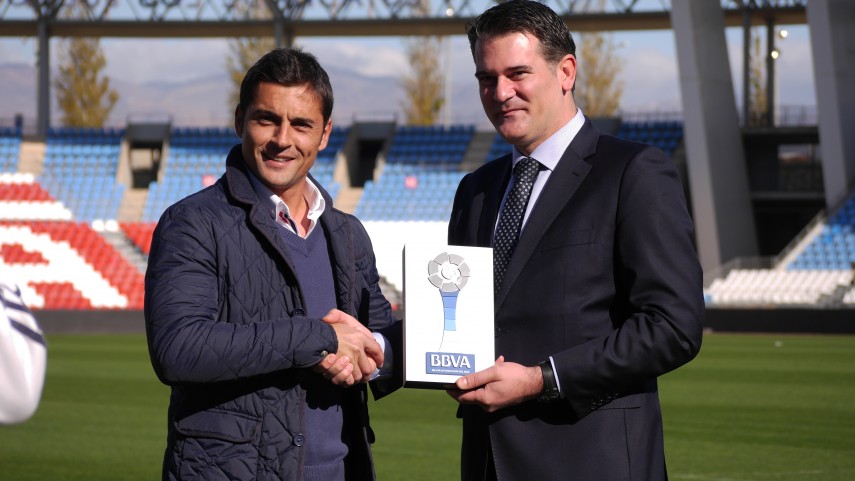 Francisco, Liga BBVA manager of the month for November

The Almería manager has been rewarded for achieving two of the side’s three victories this season in the same month, changing the irregular dynamic that his side had.

Francisco Javier Rodríguez Vílchez has been given the BBVA Manager of the Month award for November by the principal sponsors of the Liga de Fútbol Profesional.

"It is an award that is deserved by the whole team. That is how I understand team sport. It is my first year in the Liga BBVA and I would love to receive the award for many more months to come", stated Almería's coach after receiving the accolade from Andrés Rascón, BBVA's CBC director in Almeria.

One of Liga BBVA’s youngest coaches has only had three months to show his level in the highest category of Spanish football. Of the four matches that UD Almería played in November, they won two, taking three points against Real Valladolid and CA Osasuna (0-1 in both games), to give them two of the three victories they now have in Liga BBVA this season. Also, with these results, Francisco made it three wins on the spin as the side won their final game of October, hauling them away from the relegation places in the process.

In the other two games that the Red and Whites contested, they lost 0-5 to Real Madrid CF and 3-1 to RC Celta de Vigo. Two defeats won’t stop the momentum of Francisco, who has completely transformed Almería, even though they conceded eight goals and only scored three in the month; they were three that were fundamental in the side gaining six from 12 possible points in November.