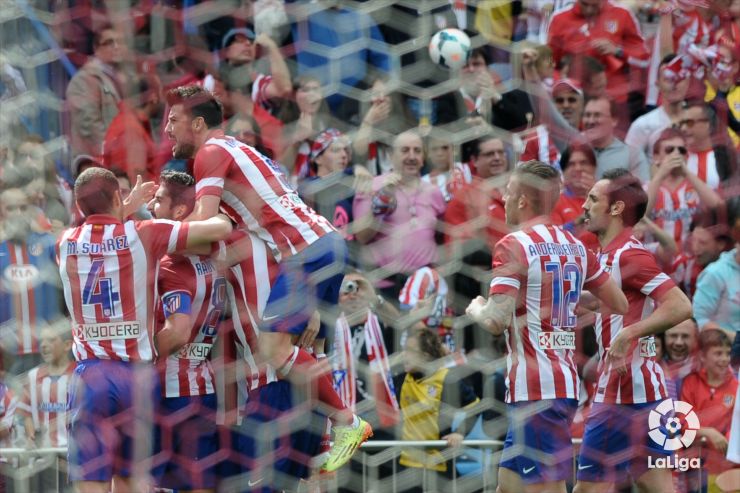 Excitement and goals in the fight for the Liga BBVA

Atlético, Barcelona and Real Madrid stay firm in their matches and keep alive the fight for the Liga title.

The Liga BBVA is very much alive. Club Atlético de Madrid, FC Barcelona and Real Madrid CF won their respective matches this Saturday and maintain all the excitement of the fight for the title for another week.

It was the rojiblancos who got the footballing Saturday off to a start. A solitary goal from Raúl García was enough to earn Diego Simeone's side victory against a Villarreal that are still in contention for European qualification. The Yellows made it difficult for Atlético, who had to deploy their best defensive weapons to maintain the result and their lead in the Liga BBVA.

FC Barcelona also had a tough game against Real Betis Balompié. Despite the result (3-1), Gerardo Martino's side had to deal with a very brave and combative Betis. Lionel Messi (2) and Jordie Figueras (own goal) scored for Barcelona at the Camp Nou. Gabriel Calderón's side managed a solitary goal from Rubén Castro, but it wasn't enough for them to draw level with the azulgranas.

The third team in the fight for the title, Real Madrid CF, also secured a victory at the Anoeta Stadium against Real Sociedad de Fútbol. Asier Illarramendi opened the scoring against his former team with a goal in the last minute of the first half and Gareth Bale, Pepe and Álvaro Morata made it a full set. The txuri-urdines could have levelled the match, particularly in the first half, but Diego López prevented it with a great performance.

Saturday came to an end at the Vallecas Stadium with a match that left Rayo Vallecano de Madrid feeling satisfied and full of confidence. A goal from Rubén Rochina and a brace from Alberto Bueno earned them victory over RC Celta de Vigo, direct challengers in the table, another giant step towards survival.