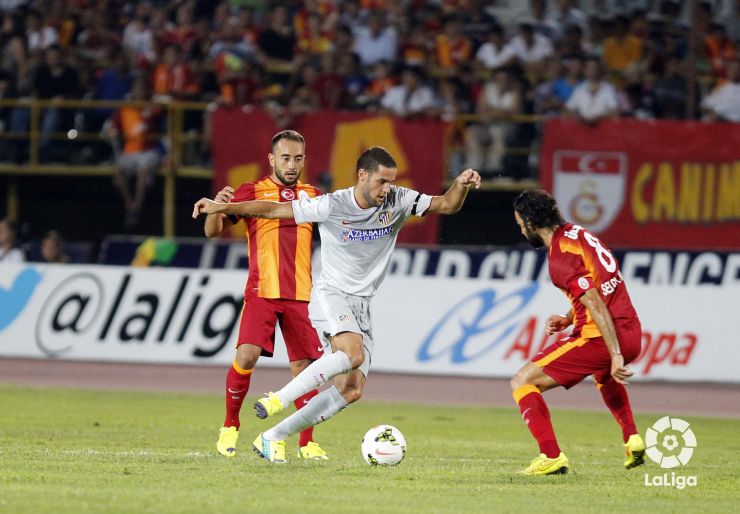 Club Atlético de Madrid and Galatasaray AŞ drew nil-nil in a match in which the atmosphere in the stands and the enjoyment of the players on both teams were the order of the day.

The match brought to an end the second LFP World Challenge Tour, which started more than twenty days ago with the sole objective of taking Spanish football and the values of the LFP to every corner of the planet and it ended by making a great impression of La Liga in the city of Izmir, Turkey.

The Rojiblancos were welcomed by hundreds of fans as they pulled up to the Ataturk stadium, which was packed with 35,000 supporters who did not want to miss the chance to see the potential and quality of the Spanish league in the flesh.

Kick-off was preceded by a minute’s silence in memory of the 282 deaths in the mining tragedy in April in Soma, the worst in Turkey’s history. The Atlético de Madrid players, and Arda Turin in particular, were visibly emotional as they stepped out on the pitch.

Despite the fact that the Spanish side started the match with its new all-star line-up, Galatasaray AŞ’s defence worked as a tight unit and the team attempted to break on several occasions. Mario Mandžukić, the Rojiblanco’s latest signing, had the best chances of the match. But the biggest winners of the night were, without a doubt, the euphoric fans, who relished the opportunity to see a Spanish team play, and all the players, who were able to test their mettle before the start of the championship, thanks to the LFP World Challenge.

After stages in Colombia, Chile, Peru, the USA, Mexico, Thailand, Australia and Germany, the second edition of this grand global event has reached its climax in Turkey, where passion for the sport and admiration for the Spanish league are a clear reality.