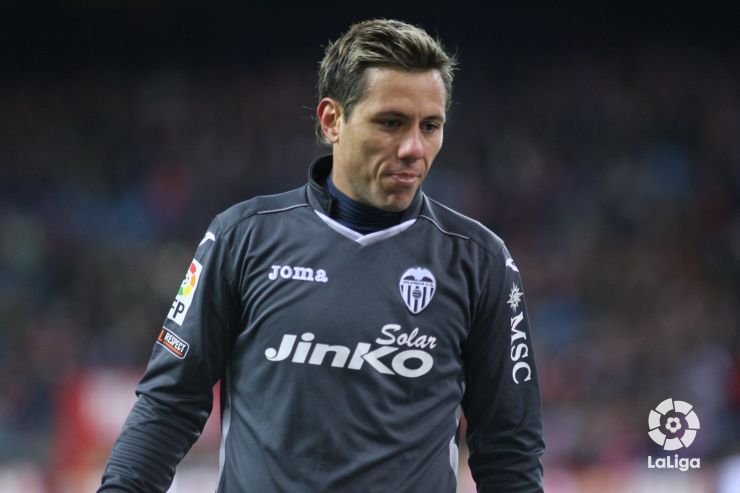 Diego Alves, the best at 12 paces

Valencia's keeper stops one in every three penalties fired at him in the Liga BBVA and he made a decisive save from one against Sevilla.

Valencia CF have turned things around in their recent Liga BBVA games and they are starting to set their sights on a higher position in the table. One of the men responsible for this is Diego Alves, who has proved to be a human wall when it comes to penalties.

Since arriving in Spanish football, Alves has shown himself to be a quality keeper who is capable of transmitting the calm required for his defence to produce their best. However, if there is one thing the Brazilian is particularly good at, it is stopping penalties.

The ex-UD Almería player has stopped 12 of the 28 spot-kicks he has faced in Spanish football, equalling Andrés Palop as the active goalkeeper to have stopped the most shots from the 12-yard spot. In total, Alves has only been beaten 14 times, as one of the remaining penalties crashed into the bar and the other missed its target.

This season he is showing his penalty-stopping prowess once more. The South American shot-stopper has saved two of the five penalties fired at him, the most recent coming from the boot of Iván Rakitić in the match with Sevilla FC, which ended in a goalless draw between the Valencians and Andalusians.

His average for the ché is 30.76% thanks to the four out of the thirteen penalties he has seen off in the Estadio de Mestalla. The Brazilian, who is in his seventh season in the Liga BBVA, stops one in every three spot-kicks and can count players of the quality of Lionel Messi, Cristiano Ronaldo, Diego Costa and Fernando Llorente among his 'victims'.