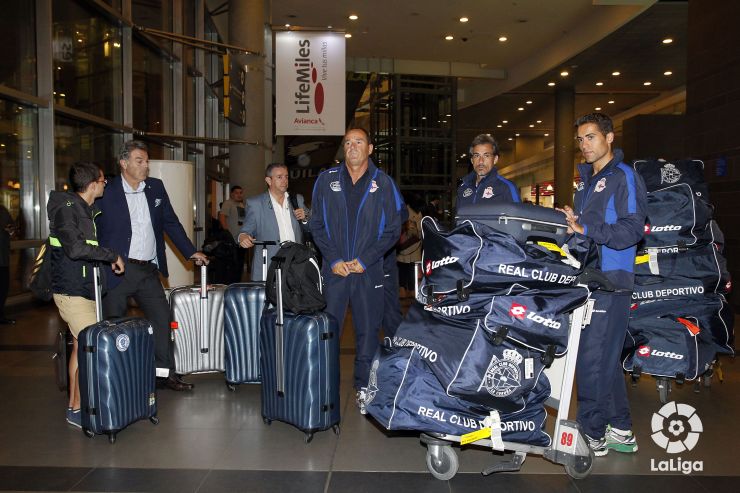 Deportivo kick off the LFP World Challenge tour in Colombia

The Galician side landed at the El Dorado International Airport in Bogota to participate in the event organised by the Liga de Fútbol Profesional.

The second LFP World Challenge tour is underway. RC Deportivo de La Coruña was the first team of the five from the Liga de Fútbol Profesional to participate in this edition, as they landed in Colombia to prepare for the two matches they will play there.

The Galician side’s players arrived at the El Dorado International Airport at 04:30 in the morning, local time, and immediately made their way to the hotel to begin their preparations for the two matches against Club Independiente de Santa Fe, on 22 July at 20:00 local time, (03:00 Spanish time) and against Asociación Deportivo Cali on 24 July at the same time.

"It is a little atypical because tours like this are not normally held in the preseason, but a change of scenery, coming and playing two matches and visiting a country like Colombia is always attractive", said Javier Arizmendi, the team’s striker, of the experience of taking part in the LFP World Challenge Tour for the first time.

In addition, his teammate Toché also spoke of the Liga de Fútbol Profesional’s commitment to the event: "It is a way for the Liga de Fútbol Profesional and Deportivo de La Coruña to make a name for themselves in South America". For his part, Isaac Cuenca, a recent signing by the side from Coruña, said that the team "gets a lot out of" this type of preparation outside of Spain.

Valencia CF, Club Atlético de Madrid, Málaga CF and UD Almería will accompany Deportivo on the second LFP World Challenge Tour, which will be broadcast on La Liga TV and includes several matches that will be played in countries such as Colombia, Peru, Chile, Australia, Thailand and Germany.

The matches can be followed on the official Liga de Fútbol Profesional website (https://www.laliga.es/en/laligatv).