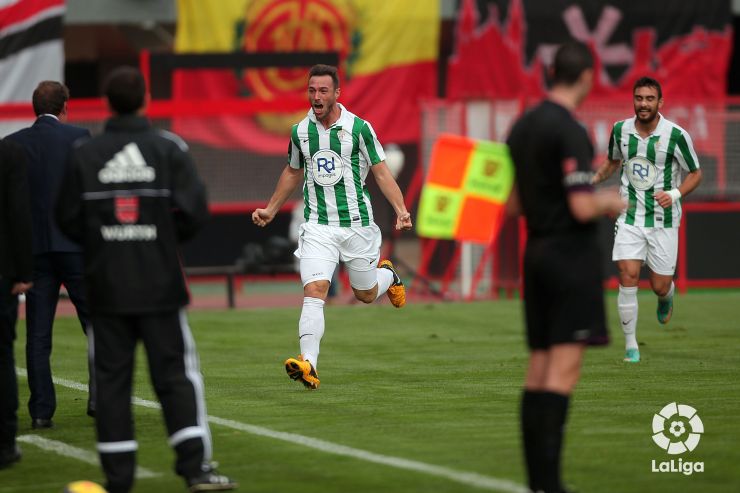 "Deportivo gave me everything in the world of football"

Córdoba striker Xisco Jiménez sits down with LFP.es to discuss his thoughts ahead of the upcoming clash against his former club this Saturday.

Xisco Jiménez (Santa Ponça, Palma de Mallorca, 26/06/1986) will be one of the stars during this Saturday's Liga Adelante clash between Córdoba and Deportivo de La Coruña. The White and Greens' forward will be the main threat to the Galician outfit, a club with which he played for six seasons and still keeps close to his heart. The Balearic Islander talks to LFP.es about his thoughts leading up to the game.

LFP.es: You’ll be involved in a very special match against Deportivo this Saturday. How are you approaching it?
Xisco: I'm up against the club that gave me everything in the world of football and gave me the chance to achieve my dream. I've experienced some fantastic things over the years in A Coruña and it will always be a great place [in my eyes]. It's a strange feeling, but I'm with Córdoba now and above all else I'm a professional. I’ll try to enjoy it as much as possible, but I know what my priorities are.

LFP.es: What are your fondest memories from your time in A Coruña? You are remembered as 'The promotion hero' after scoring two decisive goals two years ago.
Xisco: That was something really special. If I had to choose, I'd say my debut season and above all else that promotion two years ago when I was able to help the cause with those goals.

LFP.es: Quite often there is a lot of unavoidable taunting ahead of games like this. Have you spoken with any of your former teammates yet?
Xisco: I still keep in contact with quite a few of them. There hasn't been a back-and-forth of messages yet, but it will start soon (laughs). In the next few days we’ll start to wind each other up. The most important thing is that I have a chance to see a lot of friends and people who I have spent years with and share some really valuable experiences.

LFP.es: You have never hidden your love for Deportivo. How do you see the team getting on from the outside?
Xisco: They have gone through a bit of a poor streak, but will always be a dangerous team. It is a club with loads of history and great players. I’m positive they’ll be looking to fight their way to promotion very soon.

LFP.es: Let's talk about Córdoba. How would you evaluate the first half of the season?
Xisco: We’re in a great position. Our goal is to get promoted and fight to stay up, and at the moment we are on the right track. Now we have to remain consistent and not drop down the table.

LFP.es: It's away from home where you are having the hardest time, having only picked up two wins on the road. What does Córdoba need to do to improve its away results?
Xisco: It's strange. During the first half of the season we only beat Deportivo, and that was our first away match of the campaign. As we all know, winning away from home is very difficult in the Liga Adelante, that's something most teams struggle with.

LFP.es: On the other hand, you are the best team at home in the Liga Adelante, having only suffered one defeat. What is it that makes the Nuevo Arcángel such a fortress?
Xisco: It is a big pitch, and we have great supporters who get in the opponents' faces. The team feels very comfortable playing there. You begin to think that our stadium is a fortress and other teams know that it is very hard to pick up points there.

LFP.es: You've played in the Liga BBVA, the Premier League and the English Championship. Have you ever experience a league as competitive as the Liga Adelante?
Xisco: No, nothing comes close. It has been years since it was like this in Spain. It wasn't like this in England either because the year I left Newcastle the team topped the league with a record amount of points. It is so tight at the moment that any mid table side could fight for promotion. There are teams with bigger budgets, but anyone can beat anyone and that's the best thing about football. That makes it much more exciting.

LFP.es: What are your individual and collective goals for the end of the season?
Xisco: To be promoted, play as many games as possible, not get injured and score as many goals as possible.

LFP.es: Do you dare to make a prediction ahead of Saturday's games?
Xisco: I hope we win (laughs). It will be extremely difficult though because Deportivo have a lot of quality players and their poor run makes them even more dangerous. We know we are a strong side and we have to remain so no matter who we face.

LFP.es: I image you won't celebrate if you score.
Xisco: No, that would be a lack of respect. You can’t bite the hand that feeds you. Deportivo is a team close to my heart and I would never celebrate a goal against them.