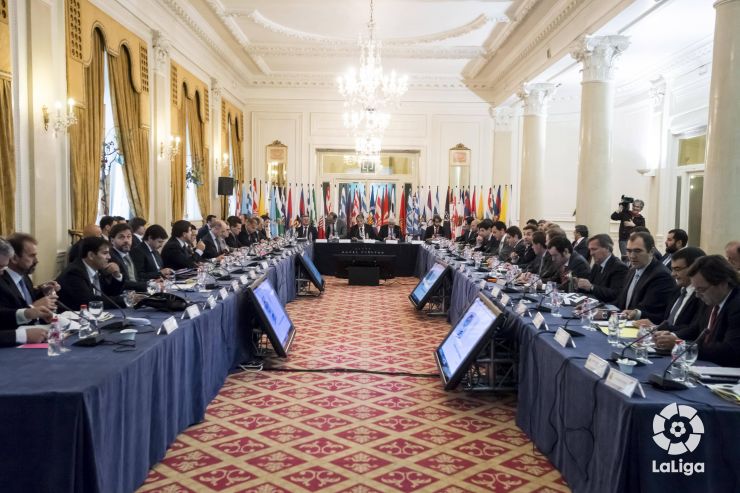 Conclusions of the LFP's Extraordinary General Meeting in Bilbao

The Meeting was held in Bilbao and most of the Liga BBVA and Liga Adelante clubs were in attendance.

The Hotel Carlton in Bilbao hosted the Liga de Fútbol Profesional's Extraordinary General Meeting. Javier Tebas, president of the LFP, opened the Meeting with a speech in which he thanked Athletic Club for the warm welcome it provided for all the Liga BBVA and Liga Adelante clubs, opening its doors and displaying its stadium. It was a welcome in which the Liga de Fútbol Profesional’s support for San Mamés' candidature as one of the grounds for UEFA Euro 2020 was evident.

The agenda for the day was as follows:

Management reports from the Liga de Fútbol Profesional's new departments:
1.- Communications department: Attendees were informed of events that have been carried out, and those that will be held in the future. In addition, there was a reminder of the voting protocol for the Liga de Fútbol Profesional Awards, which is due to take place on the 22nd of September. The representatives of the Liga BBVA and Liga Adelante clubs received a copy of the Integrity Campaign video that is being shown in dressing rooms. The clubs and SADs (Public Limited Sports Companies) were also given information on overall attendance, both in the Liga BBVA and the Liga Adelante, which is currently 2.35% more than in the 2012/13 season. Finally, there was a reminder of the fact that noncompliance with the agreement reached regarding 'superflash' interviews, post-match press conferences and player appearances in mixed zones are subject to fines and even expulsion from the competition.

2.- Competition Department: Attendees were informed of a study on the regulation of player simulation, and new tools to improve the competition, such as an application allowing referees and match delegates to choose the kits to be worn by each side.

3.- Integrity Department: All of the match-fixing forums that the Liga de Fútbol Profesional has attended were revised, and the need to implement plans to prevent criminal activity at all clubs according to the new Penal Code has been noted. Also, the necessity to designate a person from each institution to ensure the obedience of the plans has been reiterated.

4.- Legal Department: Open investigations for both disciplinary and economic control were presented.

LFP World Challenge
The calendar of events and matches to be played in Malaysia, Indonesia, Hong Kong and China was presented.

Schedule proposal for both the Liga BBVA and the Liga Adelante
1.- Liga BBVA: No agreement was reached with regards to any of the proposals submitted, and therefore the decision has been delayed for between 24 and 48 hours.

2.- Liga Adelante: In accordance with the results of the vote, the competition will commence on August the 24th.