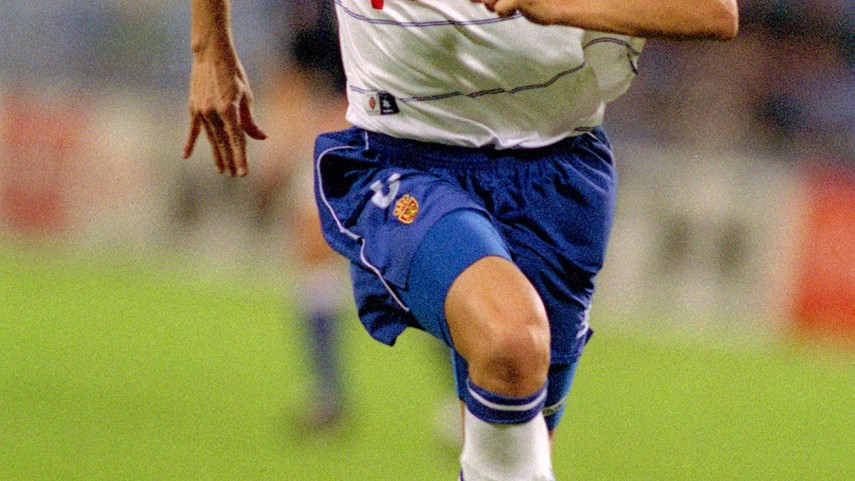 Cáceres a role-model for Xavi Aguado

The ex-Zaragoza player shared with LFP.es some anecdotes from his time with his old teammate, whose tribute match is on Wednesday.

In the context of the tribute match that Real Zaragoza are holding for Fernando Cáceres on Wednesday in La Romareda (20:30), which will include the presence of old teammates, rivals and compatriots of the team from Aragon’s old centre-back, ex-footballer Xavier Aguado spoke to LFP.es about some of his most memorable moments with his old teammate.

Aguado, a household name in Zaragoza, having played 473 matches for the team between 1990 and 2003, not only shared a dressing room with Cáceres. Together they formed one of the club's most successful and memorable partnerships, winning a Copa del Rey in 1994 and a UEFA Cup Winners' Cup in 1995. Those glorious years during which Cáceres wore the colours of Zaragoza (1993-1996) gave rise to a great relationship that was born in the same hotel where the pre-match press conference was held on Monday.

"Seeing Fernando again was great, it was quite emotional. We remembered a lot of old stories together", says Aguado, after meeting his old friend in the same place they shared their first room together in 1993, after the Argentinian's arrival in Zaragoza. "At the time, his signing was an uncertainty, nobody expected him to do so well, but he showed his tactical prowess", he points out.

"I learnt a lot from him. Above all, his calm and serenity rubbed off on me. He never lost it. In terms of his game, he always knew when to go forward. He was a very complete defender".

In Fernando Cáceres' first season at Zaragoza, the team from Aragon recorded a resounding 6-3 win over FC Barcelona in which the Argentinian made it 1-0 after five minutes, having joined the attack. "It was the best match I have seen in La Romareda. We were facing the European champions, the Dream Team that had won the European Cup at Wembley. That match typified what Zaragoza was about at the time. We played with great ambition", remembers Aguado.

The post-script to that campaign was victory in the Copa del Rey after beating RC Celta de Vigo in the final, after a penalty shootout in which Cáceres took the first spot-kick for his team. For Xavi Aguado that was when people saw what kind of player Cáceres was: "Víctor Fernández asked who wanted to take a penalty. Fernando was one of the players to put his hand up. It was then that you could see who was ready, and it was he who stepped forward and took the responsibility".

In the following season Real Zaragoza recorded one of its most important victories by beating Arsenal FC 2-1 in the final of the Cup Winners' Cup, with a memorable goal from Nayim from 49 metres in the second-half of extra time. From that sweet celebration, one image is burnt into the minds of Zaragoza fans and football fans in general: that of Fernando Cáceres sitting on one of the crossbars, screaming with joy and hoisting the trophy in his left hand.

"That picture is unforgettable, of course. He told us he was going to do it, that it was something of a custom in Argentina. From the celebration I also still remember the image of Gus Poyet crying and Miguel Pardeza biting his gold medal. With Fernando, I do not only remember that picture, I remember our daily lives, every moment I experienced with him for three years. I only have respect and admiration for him", claimed the 45-year-old ex-player.

Finally, Xavi Aguado wanted to take his opportunity to send a message to all the fans who attend the match on Wednesday: "We have to be more united than ever for this testimonial. Fernando is a symbol of Zaragoza and he deserves it. We should make the effort and, together, fill La Romareda on Wednesday".