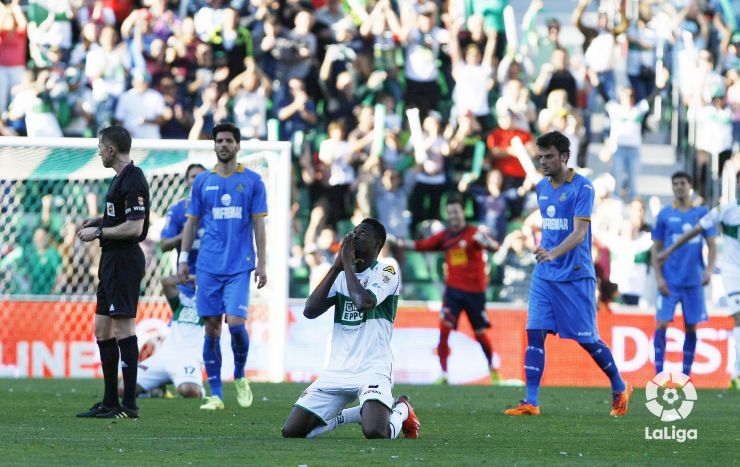 Boakye snatches it at the death

Elche gets the winner in the 93rd minute and moves well away from the drop zone, while things get even worse for Getafe.

Elche snatched a winner right at the death in their Liga BBVA matchday 32 encounter with Getafe, putting an end to a match that was otherwise low on chances and drama. Richmond Boakye got the goal after coming on as a sub to the delight of the home support.

Cristian Herrera controlled the ball on the left wing and his shot skimmed across the goal mouth, but didn't go in; while Ángel Lafita smashed a long ranger against the woodwork.

After the half time break, some of the home fans were tricked into thinking Javi Márquez had opened up the scoring, but his left-footed strike from distance went the wrong side of Jordi Codina’s post.

Elche had the visitors on their knees again in the 90th minute, but no one got on the end of a free kick swung in from the left and Codina was able to smother what looked like the last chance of the game. However, another scoring opportunity was to come, and this time Boakye made no mistake with it, giving his side a vital push in their fight for safety. Elche have now picked up 35 points this season, five more than Real Valladolid, who close out Sunday’s action against Valencia. Getafe, meanwhile, make their way back to Madrid empty handed.