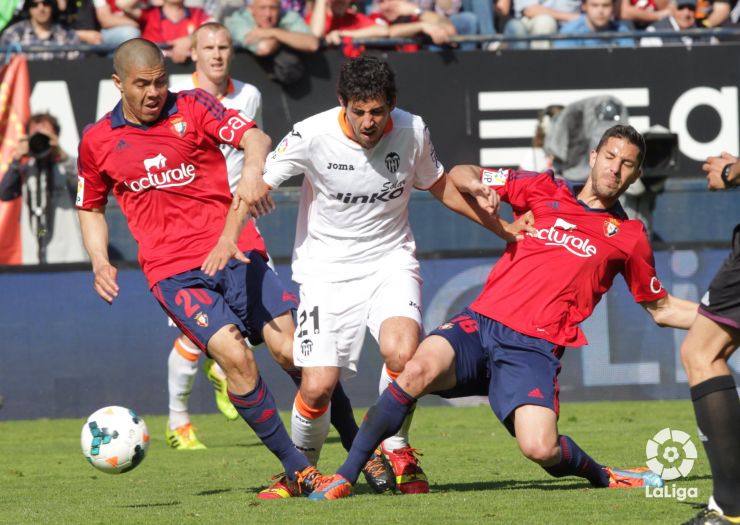 Valencia equalised nine minutes from the end in a very evenly matched game in which the Navarrese side took the lead with a goal from Oriol Riera.

The game between CA Osasuna and Valencia CF on matchday 34 of the Liga BBVA ended in an exciting draw. The point was not enough for the Navarrese team to move permanently away from the relegation zone.

Parity prevailed in the early stages of the match. Osasuna, drawing on their home advantage and their committed support, decided to take the initiative. But Valencia averted the danger, motivated by the need for points to rejoin the fight for the European spots. In the 18th minute, Vicente Guaita cleared a shot from Roberto Torres and Oriol Riera reacted quickly to fire in a shot from inside the box and open the scoring.

After the score the Valencians fought back, but the goal did not come. Following the restart, the rojillos once again took control of the game. In the first few minutes, Roberto Torres hit the post, and Valencia responded by descending upon Andrés Fernández's goal. Nine minutes from the end a cross from Vinícius found Jonas, who levelled the scoreboard. The equaliser spurred Valencia on and they went after the winning goal, ensuring an exciting finish to the match. But a strong Osasuna defence prevented them from scoring and the two teams went away with a single point that will do little to help either of their causes.