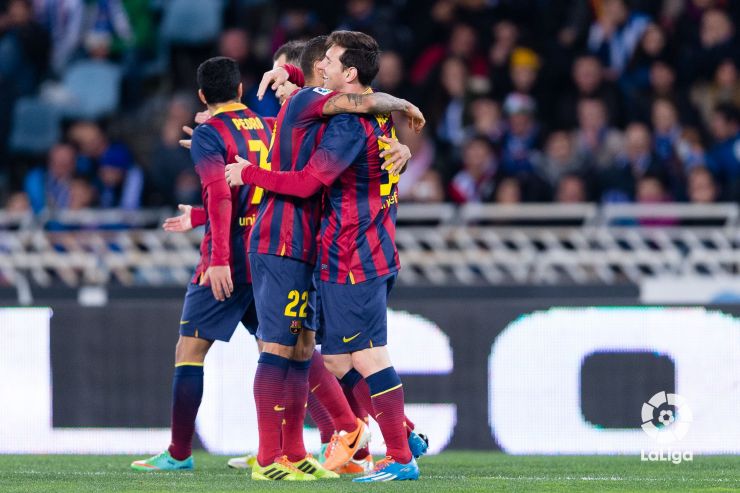 Barcelona is through to the Copa del Rey final

The Catalans got past a Real Sociedad side full of eagerness but lacking in accuracy in front of goal.

Anoeta was prepared for a night of drama as the last remaining spot in the Copa del Rey final (April 19) was up for grabs. Barcelona, taking a 2-0 lead into the second leg, just had to defend deep against a persistent Real Sociedad side.

After an opening period full of intensity but lacking in any meaningful chances, Gerardo Martino’s men broke the deadlock in San Sebastian. Lionel Messi finished off a mazy run with a low powerful shot that trickled under Eñaut Zubikarai before rolling into the back of the net. Any chance of comeback was made even more complicated now for Real, but despite the setback, they kept looking for ways to trouble José Manuel Pinto’s net. With more heart than head, Jagoba Arrasate’s men didn’t let their tempo drop in their search of a lifeline that might turn the three-goal deficit around.

A beautifully hit Carlos Vela strike on the half turn which crashed off Pinto’s post was the home side’s best chance of the night, and as the match wore on, their high intensity strategy started became evident with their decreasing energy levels. Barcelona, more than comfortable with the result, were only frustrated by Zubikarai’s fine performance, with the Real keeper preventing an even heavier defeat for his team. Sociedad got a consolation goal at the end through Antoine Griezmann, who beat Pinto with a well-struck shot which came courtesy of a fantastic pass from Canales. With a 1-3 aggregate win, Barcelona takes the last remaining place in the 2013/14 Copa del Rey final.