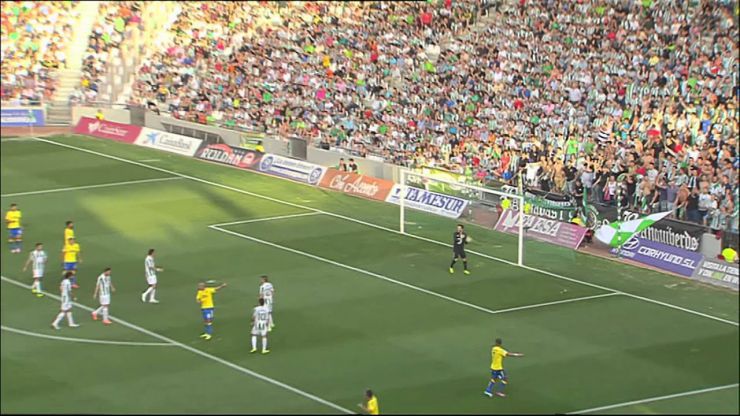 A great performance from the Las Palmas goalkeeper kept Córdoba at bay and now leaves it all to play for this Sunday.

The Estadio Municipal Nuevo Arcángel was the setting for the first of the playoff final games between Córdoba CF and UD Las Palmas, two teams that fought with grit and determination from the first minute of the encounter in order to take the lead in the playoff. However, neither side was able to break the deadlock.

It was the home team that took control of the game. Not a minute had passed when, at full pace, Uli Dávila got ahead of Mariano Barbosa before bearing down on goal. Good reactions from the goalkeeper ensured the danger was extinguished at the expense of a corner.

That was the best chance during the first half. There was a lot of quality on display from both sides, with Córdoba making use of their greater speed, while the Canary Islanders looked to hit them on the break with Carlos Aranda and especially Nauzet Alemán standing out. Good defending from Las Palmas prevented the Andalusians, led by Xisco Jiménez in attack, from scoring. The Balearic striker had his team's best chance during the first half.

Jiménez had another clear goal-scoring opportunity after the break after a defensive error by the away side. But once again Barbosa was at hand to frustrate Córdoba. Las Palmas slowly began to pacify their hosts. The last few minutes were full of tension. Albert Ferrer's men threw everything at Barbosa’s goal, but it was not to be. The last remaining Liga BBVA spot will be decided in Gran Canaria.