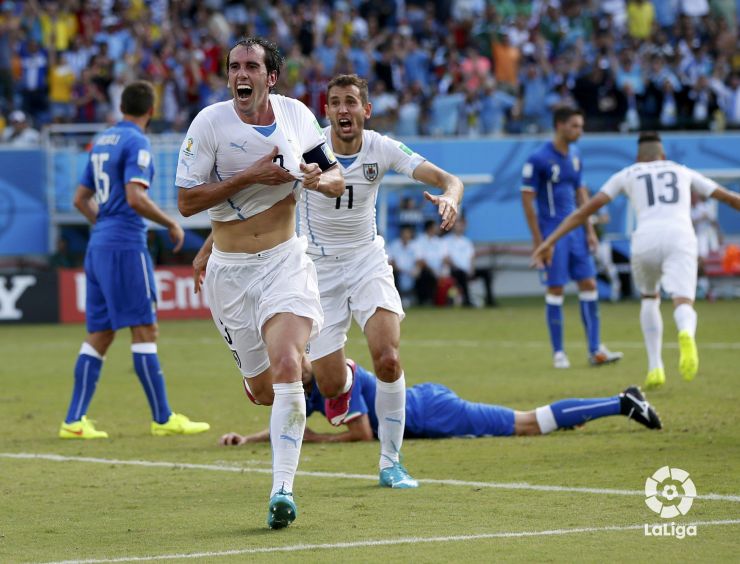 Centre-back Diego Godín scored the winning goal against Italy, sealing the Celestes’ qualification for the second round.

The 2014 FIFA World Cup has got off to an unforgettable start. At this point, with some group matches yet to play, three world champions have already packed their bags, two of them at the hands of one of the tournament’s surprise packages, Costa Rica. However, one side’s successful start comes as no surprise, that of Uruguay and Diego Godín, the hero of the Rojiblancos’ league title a little over a month ago in the Camp Nou.

Having lost their first match 3-1 to Costa Rica, the South American side looked like they would struggle to progress. Before them stood England and Italy, two all-powerful teams who were in a very similar situation. All of them were fighting for a place in the second round and Uruguay’s grit eventually shone through. First in the form of Luis Suárez against England and then through Diego Godín against the four-time world champions.

Just as he had against FC Barcelona in the Camp Nou in the last Liga BBVA match, he gave victory to Óscar Washington Tabárez ‘s men and a ticket to the second round to take on the surprisingly bright Colombia, who topped their group with a clean sweep of victories. It will be a South American battle for the right to continue forging history at the biggest tournament in the world.

Godín has had a season to remember. Atlético’s centre-back commanded their rear-guard in the Liga BBVA together with João Miranda and took Diego Pablo Simeone’s men to the league title 18 years after they last achieved the feat. His ability in the air was evident in both boxes all season, earning him a reputation as one of the world’s most in-form defenders last year.

In addition, the player born in Rosario, Uruguay, came close to giving his club another title after scoring the opener in the UEFA Champions League final. However, a Sergio Ramos header in the last minute quashed Atleti’s hopes of lifting the most coveted trophy in Europe.

His club coach was in no doubt: "I would not let Godín go, he is one of the most important players". In addition, Simeone was full of praise for the progress of the Rojiblancos’ number 2, stating that "he has improved vastly in all aspects of the game" and that he expects him to stay at the club on the banks of the Manzanares.

If the statistics are to be believed, Uruguay have a hopeful future in Brazil. In the last seven clashes between the Celestes and Colombia, Godín’s side have been victorious in five, drawn one and only lost one. South America will soon be celebrating as two of its countries clash for a place among the best eight teams at the World Cup.