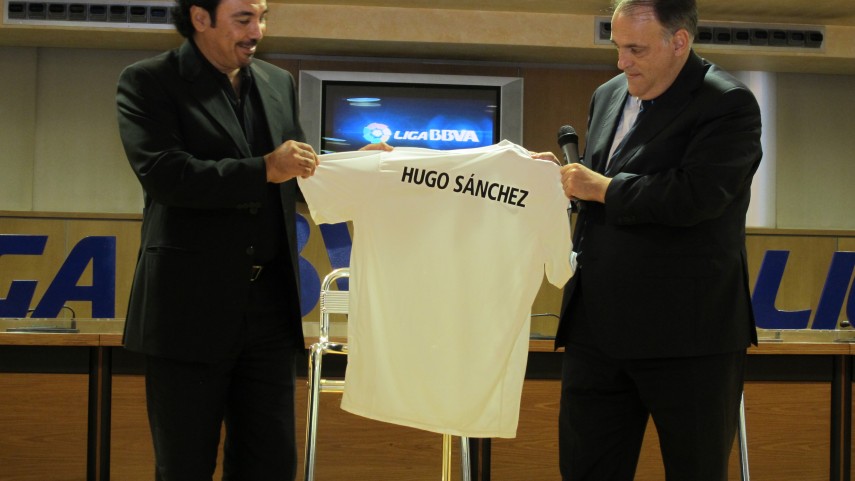 "Atlético is a strong contender"

Hugo Sánchez, the LFP's new ambassador, analyses the current situation in the Liga BBVA and gives his opinion on the performances of his old teams.

Hugo Sánchez was introduced on Thursday as a Liga BBVA ambassador. In an event presided by Javier Tebas, the president of the Liga de Fútbol Profesional, the Mexican spared some time to discuss Spanish football with LFP.es.

The first thing the ex-Club Atlético de Madrid, Real Madrid CF and Rayo Vallecano player did was compliment the current momentum of one of his old teams. "Atlético is among the favourites to win the league, and that is very good for the competition. Diego Simeone is demonstrating that with his resources he can create a powerful, balanced and harmonious side, which a difficult thing to do. The coach has the capacity and wisdom to let his players know that the only way to be on top is as a team. Let's hope it is an exciting battle until the end. They are competing with Madrid and Barcelona. Simeone has introduced a continuity which is very important for the club. It is a strong contender, watch out for Atlético", he said yesterday of the Red and Whites' spectacular start to the season.

Finally, Hugo Sánchez spoke about the Mexican players in the Liga BBVA. "Nery Castillo is struggling to find continuity. Let's hope he reaches his potential because he could really help Rayo. The rest, and above all Carlos Vela, are getting a lot of minutes and demonstrating their quality".