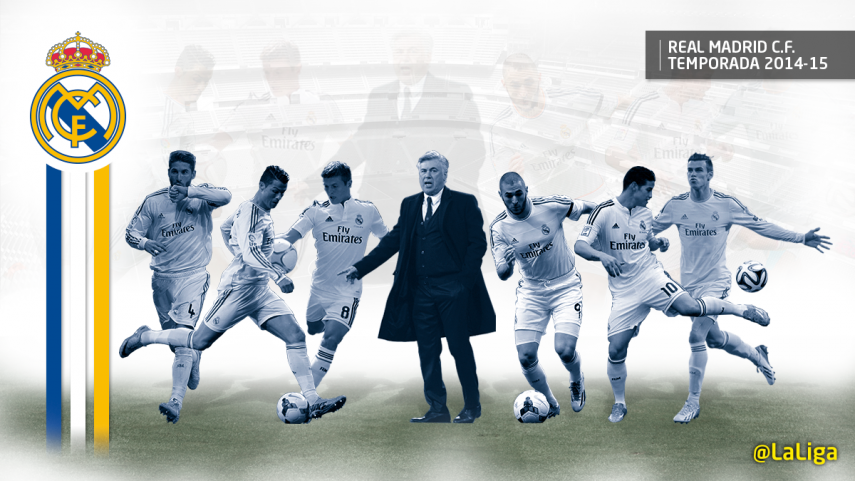 An exciting campaign ahead

After kicking off the 2014/15 season with victory in the UEFA Super Cup against Sevilla, Real Madrid face Atlético in a bid for their second title in a campaign in which they will battle it out for six trophies. Here we introduce Carlo Ancelotti's new Madrid.

Real Madrid CF have made a good start to a season full of expectations, in which they will battle it out for six titles. TheY claimed the first of them last Tuesday when they defeated Sevilla FC in the UEFA Super Cup, and now they go into the clash that could earn them their second title of the campaign, the Supercopa de España, in which they face Diego Pablo Simeone's Atlético de Madrid.

Last season, Carlo Ancelotti's boys brought their fans the enormous joy of conquering their coveted tenth European Cup when they defeated Atlético in the UEFA Champions League, and the ambition of the squad led by the Italian manager means their supporters can dream of a magical year in which the club will battle it out for six trophies.

The new signings have strengthened the team even more

Real Madrid and Atlético faced each other on five occasions last season, with Ancelotti's side claiming the most valuable victories in the semi-finals of the Copa del Rey and the final of the UEFA Champions League, two titles that they went on to win. Atlético had more success in their Liga BBVA clashes and also went on to win that championship. Since the 1999/2000 campaign, the Rojiblancos had not beaten their neighbours for 14 years, a run that ended in the 2013 Copa del Rey final. Since then, everything has been much more even, and these two new clashes once again promise plenty of excitement.

The arrival of Toni Kroos, James Rodríguez and Keylor Navas has only strengthened a squad that was already very much complete. The three signings performed outstandingly in the 2014 FIFA World Cup in Brazil and they arrive in Madrid hoping to make a name themselves.

The possibility of claiming six titles, an added incentive

Kroos and James made their debuts for the club in the UEFA Super Cup and both made a good impression, particularly the German, who impressed by stepping in to take over in the midfield in the absence of Xabi Alonso. Alongside them, Madrid possess a lethal attack in the form of Cristiano Ronaldo, Gareth Bale and Karim Benzema. The three of them scored close to 100 goals last season, and this year they will look to go past that magical number.

A season full of expectations

After a good 2013/14 campaign in which the team claimed the Copa del Rey and UEFA Champions League titles, Madrid will look to go one better this season, in which they will compete on six fronts. The Liga BBVA that has eluded them since the 2011/12 season is one of the major targets, but Ancelotti's men will also aspire to defend their Copa del Rey and Champions League titles. Madrid have also already claimed the European Super Cup title and will now bid for the Supercopa de España, before attempting to conquer what will be their first FIFA Club World Cup in December.