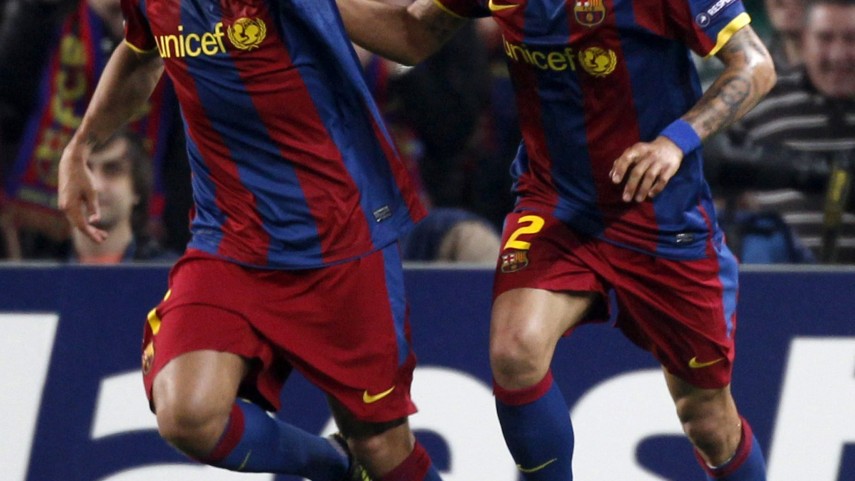 Alves and Adriano: back to their roots

Fate, if there is such thing, has established some interesting parallels in the lives of Dani Alves and Adriano Correia. Both players were born in Brazil a little over a year apart and played for their home teams until making the move to Europe. Both of them were stars of Sevilla FC's best ever side before arriving on the world stage with FC Barcelona. Both players will start on Sunday upon their return to the Ramón Sánchez Pizjuán stadium, where their meteoric careers took root.

The arrival of the players at Sevilla coincided with a golden era at the club. Dani Alves arrived at just 19 years of age in the 2002/03 season and, despite his youth, he was soon in the starting eleven. After a few months finding his feet, Alves made the right flank his own in the 2003/04 campaign, a position he kept until he left Sevilla in June 2008. His defensive strength coupled with an ability to double up as a world-class winger make him one of the great full-backs of his generation.

You could say the same of Adriano. He arrived in Sevilla a few years after Alves, in January 2005, but he had a similar impact on the club. In his case it was versatility, an ability to play as a full-back or a winger, which brought joy to the Sánchez Pizjuán faithful for six years, until he left for Catalonia. Both Alves and Adriano were key players in the story of a Sevilla that conquered Spain and Europe in the middle of last decade under the orders of Juande Ramos.

It was the Sevilla of Andrés Palop, Seydou Keita, Jesús Navas, Renato and Enzo Maresca, of the Luis Fabiano - Frédéric Kanouté duo, of the two consecutive UEFA Cups in 2005/06 and 2006/07. Alves and Adriano were key components to adding a golden era to the long history of the club. That Sevilla team created two footballers whose parallel careers continued as they left for Barça to establish themselves in world football and fill their trophy cabinets under Josep Guardiola.

That glorious past will come flooding back as the two players return to Sevilla, where Barcelona will face a tough test in its fight for the La Liga title. It would be a great surprise if Dani Alves were not on Barcelona's right flank and Adriano will be making the most of Jordi Alba's red card in the last match (a twist of fate?) to patrol the left touchline. No sooner has the referee blown his whistle, any feelings of nostalgia will be forgotten and it will be down to business in the fight for three valuable Liga BBVA points.