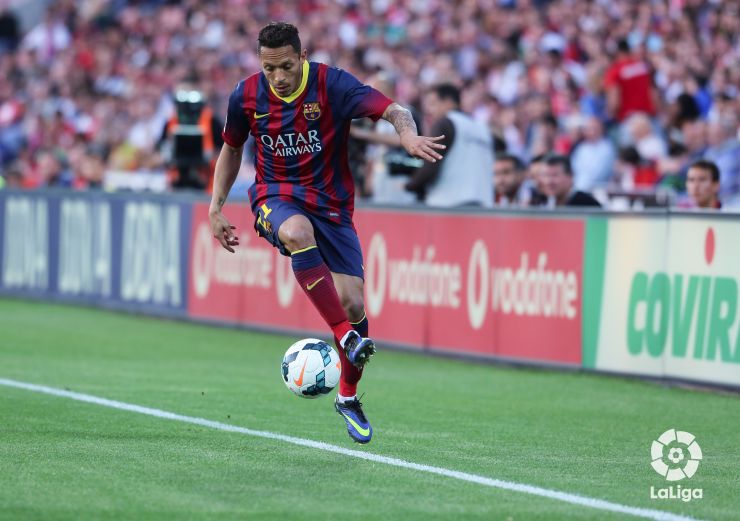 Five minutes ahead of the last official training session of the season, the Brazilian player takes some time out to give LFP.es an exclusive interview.

Five minutes ahead of the last official training session of the season, Adriano Correia (Curitiba, Brazil, 26th of October 1984) takes some time out to give LFP.es an exclusive interview. All smiles and apparently completely relaxed, the Brazilian explains what the feeling is like in the Barcelona dressing room ahead of the all-or-nothing clash against Club Atlético de Madrid which will decide the Liga BBVA champion.

LFP.es: You could not ask for a better Liga BBVA finale than a match of this magnitude.
Adriano: Nobody thought that this season would be end with a surprise like this, with a massive game such as this one. It's been a long time since La Liga was decided on the last day of the season and we’ll be treating it like a final.

LFP.es: What is the feeling like in the dressing room ahead of the match?
Adriano: It has been a tough and unconventional season in which we have suffered a lot and now we are close to the title again. It would be incredible if we could win the championship in this match. We are so excited and anxious to play it now.

LFP.es: Anxious in what sense?
Adriano: Anxious for 6pm to arrive, because that's when we warm up and go out in front of the fans. The atmosphere will be fitting for such a special match. We're one hundred per cent ready and we want to play a great match in order to win the championship. It's all we're thinking about.

"Everything about Atleti concerns us: their attacking football, their physical intensity, their defence and their individual players"

LFP.es: Barcelona has won 16 matches in the Camp Nou this season. Do you feel like favourites?
Adriano: This match is 50/50. We're playing at home, but we've met a lot this season and we know how strong they are. Atlético have had a great season and also deserve to win La Liga, but we’re only thinking about our own game and enjoying our football.

LFP.es: What concerns you most about Atlético?
Adriano: The way they play, their attacking football and their physical intensity. They also have some very good individual players and they're very strong in defence. But we know each other well enough to know how they are going to play. We'll be trying to break down the wall they put up at the back and to shut them out.

LFP.es: One of the key reasons why the Rojiblancos' have come so far has been Diego Simeone. How does an opponent see him from a distance?
Adriano: He's a manager with a lot of character. He's obviously someone who gives his all for his team, he'll do anything for his players and he fights for the group. And this can also be seen in Atleti's game, in their philosophy and their football. As a player he was a fighter and now he shows the same spirit as a manager.

LFP.es: What message do you have for your fans?
Adriano: We want to do everything we can so that they enjoy the match too. We're dedicating it to them because they've never failed us and they've always been there when we've needed them. I urge them to get behind us because we're going to give everything to win and find strength even where we don't have it to claim the Liga.

LFP.es: What has been the most difficult moment of the season?
Adriano: The most difficult thing, without a doubt, has not been on the field, but with everything that happened with Tito Vilanova. His relapse and everything that happened later has affected us a great deal. We want this game, and victory, to be our best possible tribute to him. We're going to give everything on the field to dedicate the title to his family, because they’re part of this.

LFP.es: It will also be an important fixture in terms of Carles Puyol's departure. What does he mean to Barcelona?
Adriano: Puyi is one of the best people that have been at the club and the best captain that the team has had. He's always looking out for his team mates, for how we're feeling. He helped me a lot when I joined the squad. When he sees someone looking lost or not quite there mentally, he always makes the effort to speak to him or cheer him on. And I've never seen him angry or sad. He's always happy, even on the toughest days. Everything he has achieved in his career has been through hard work, effort and humility. None of it's a coincidence.