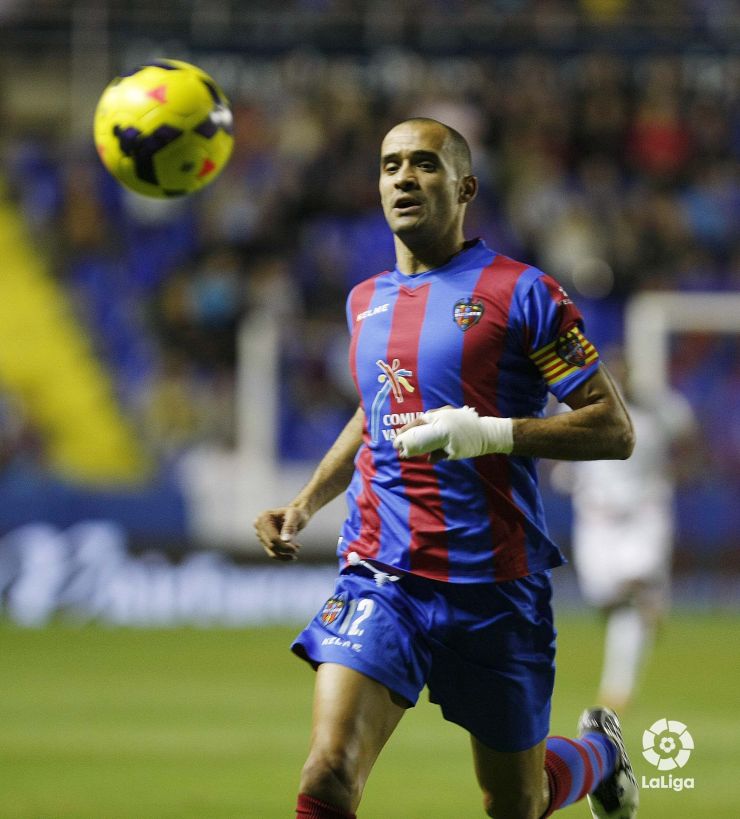 "A tight-knit squad is our greatest weapon"

LFP.es spoke to Levante full-back Juanfran about his 100th match, the team's mindset and its recent years in the Liga BBVA.

Juan Francisco García García (Valencia, 15/07/1976) is one of the Liga BBVA's best-known defenders. His charisma and knowhow on the pitch have made him into a key player for Levante UD, the team where he started his footballing career. Against FC Barcelona, the full-back played his 100th game for the granotes and LFP.es spoke with him about his impressions on the current season in the competition.

LFP.es: What a great way to celebrate your 100th match with Levante, don't you think?
Juanfran: It really was a complete match. First because I was celebrating my 100th match with Levante and second because of the result. I always say that for a small team to pick up points against a big one it is necessary, apart from to play well for 90 minutes, to have a little bit of luck.

LFP.es: You started your footballing career at Levante. What would be your highlights of your recent years with the granotes?
Juanfran: I returned four years ago after fourteen years away and I think things have gone really well. I think it is a club that is respected and if I had to pick one thing, I think it would be the promotion they won (in the 2009/10 season) and being able to play in European competitions. That used to be unthinkable for Levante.

LFP.es: Last season was a dream. Experiencing it from the inside, what differences do you see between last year and this year?
Juanfran: The main difference is that there are a lot of new players. Here at Levante we have always said that we have to build a tight-knit squad, because it is our greatest weapon. We all get along great and we are like a family.

LFP.es: You scored Levante's first goal in a European competition. What did that moment mean to you?
Juanfran: Just imagine, it is the most amazing goal I have scored in my career and it was even more thrilling for other reasons. Because I was with Levante when I was little, because I was a fan before I was a player, because I am a local and because it was the first time the team was playing in Europe.

LFP.es: You seem to have a knack for important goals. You also scored the first against RC Celta de Vigo in the UEFA Champions League. Do you have any secrets for being in the right place and being able to score those goals?
Juanfran: (laughs) Coincidence. Also for Celta I scored the 1,900th league goal against Real Racing Club. I haven't scored many, but the ones I have got have been significant, and above all they have gone down in the history of the clubs I have scored them for.

We know the importance of our home for achieving our goals. We have to be strong

LFP.es: At 37 years of age you are one of the team's bastions. When will Juanfran hang up his boots?
Juanfran: I don't know. Last season I decided to trust my instincts and at the moment I feel great. I have renewed for another year and I am feeling really good. I always say that as long as there is motivation and excitement about training, and when I go out and smell the turf I am the happiest guy in the world, then I'll stay. I am not going to set a date because I think you start to realise day by day.

LFP.es: What is it about this team in the Ciutat de València against the big guns?
Juanfran: We are a family and we know that the only way to get something is by running for 90 minutes and respecting all the teams. But above all we know the importance of our home for achieving our goals. We have to be strong, we have to be a team that creates problems for all the others.

LFP.es: This year the team has picked up 24 points and sits in the middle of the table. What are Levante's true goals this season?
Juanfran: Our clear goal is to stay up year after year. For Levante to be able to play in the first division for as many years as possible. This team had never achieved it before and we are bidding for many more years there. As long as we keep being that team that does not give anything away, things are looking good.

LFP.es: You are to meet Barcelona in the cup. After the draw in the Liga BBVA, do you think you have a chance of making it through?
Juanfran: Our focus is the league. We picked up a point we did not think we would get and we know that in the Copa del Rey if you make it through the rounds you will meet a big team that is difficult to knock out in a two-leg match.