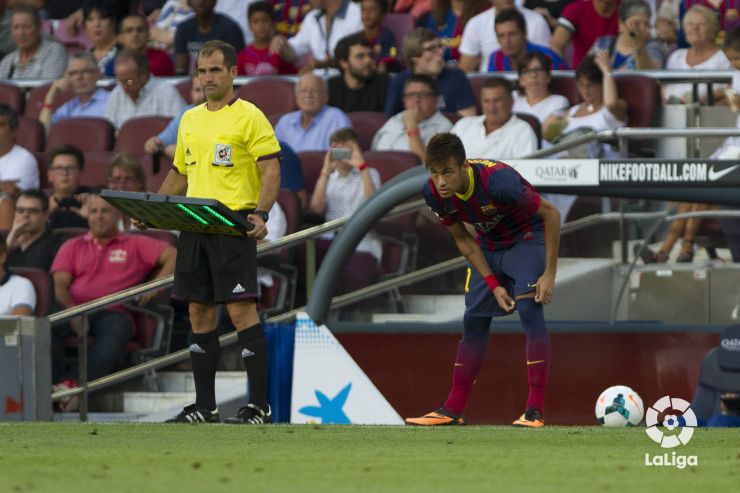 The match between Barcelona and Real Madrid is notable for the debuts of several members of both clubs, including the managers.

Gerardo Martino, Carlo Ancelotti, Neymar, Gareth Bale, Isco Alarcón and Asier Illarramendi will be some of the stars in the upcoming Clasico between FC Barcelona and Real Madrid CF who will be playing in a match of this size for the first time.

The arrival of 'Tata' Martino and the Brazilian player at FC Barcelona generated a lot of expectation among fans of the Azulgranas. Eight consecutive victories in their first eight Liga BBVA matches were just a precursor to what is to come on Saturday the 26th of October in the Camp Nou. Both of them are used to living life under the microscope of the media from their spells with the Paraguay senior team and Santos FC, respectively, and they will have the opportunity to stamp their name on a Clasico that is to be broadcast around the world.

The coach from Rosario led Club Cerro Porteño in four Clasicos against Club Olimpia in Paraguay, drawing two and winning the other two. For his part, Barcelona's new number 11 will have the opportunity to measure up against his international teammates such as Marcelo Vieirra in the match against the Whites. "I have told Marcelo that we are going to win El Clasico", Neymar told the media this week.

Ancelotti, Bale, Isco and Illarramendi are just some of the rookies in the ranks of Madrid. The Italian coach will be unfazed by the magnitude of the occasion, having managed teams such as Juventus and Paris Saint-Germain FC before arriving in the Spanish capital. During his stay in Italy, Madrid's coach was at the helm for four Serie A Clasicos against FC Internazionale Milano winning three and drawing one, while in France he recorded two victories and a draw against Olympique de Marseille in Le Classique.

For their part, the Welsh international and the Spanish midfielders will have a chance to experience a Clasico first hand. Despite their youth, the three players also have experience in big derby clashes. Bale played in games against Arsenal FC, Chelsea FC and Fulham FC during his six-year spell in London with Tottenham while Illarra played against local rivals Athletic Club when he was serving in the ranks of Real Sociedad de Fútbol in the Basque Country.