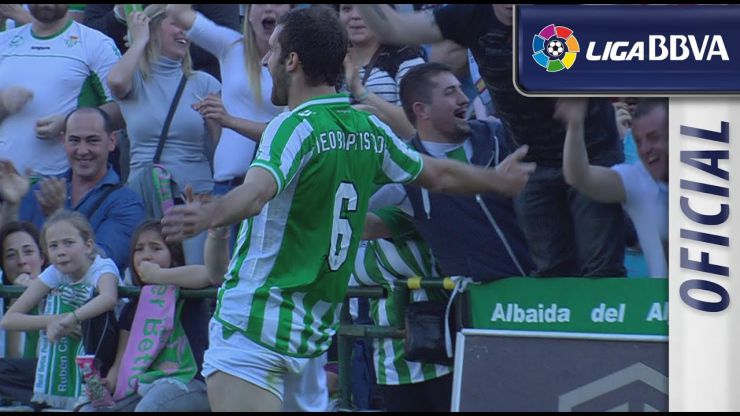 A glimmer of hope at the Villamarín

Betis defeated Getafe 2-0 with goals from Baptistão and Rubén Castro to cling to the hope of staying in the Liga BBVA.

Real Betis will not surrender. The verdiblancos overcame Getafe CF 2-0 on the 27th matchday of the Liga BBVA, thanks to goals from Léo Baptistão and Rubén Castro, to keep alive their hopes of staying in Spanish football’s top flight.

Gabriel Calderón's team, playing with intensity and pride from the off, quickly found the target and fuelled the hopes of all the fans present at the Benito Villamarín Stadium. Fifteen minutes in, Salva Sevilla linked up with Baptistão from the corner and the Brazilian scored the goal that made it 1-0 with a great header. Before they headed back down the tunnel, Rubén Castro scored the second goal for Betis with a powerful strike that went in off defender Rafa López.

After the break, the Andalusians fiercely defended their lead to secure their priceless three points. Getafe, meanwhile, were unable to turn the game around in the second half despite some great chances, and their poor run extends to twelve matches without a win.