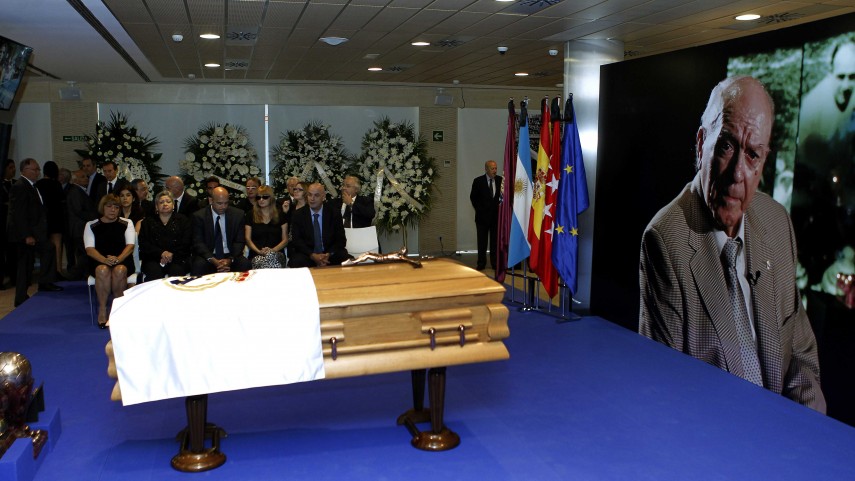 A final farewell for Di Stéfano

Numerous personalities from the world of sport and thousands of fans made their way to the public viewing of the Real Madrid legend’s remains to pay their final respects.

Thousands of fans and different personalities from the world of football are saying their goodbyes to Don Alfredo Di Stéfano, the ex-Real Madrid player and Honorary President, as well as a man who played for a various other Spanish teams. Between 10:30 and 21:00 CET (Tuesday), people have been descending on the public viewing in the presidential box of the Santiago Bernabéu to bid farewell to the Madrid legend.

"He is gone but his legend will live forever, although I personally feel that part of me has gone with him", declared the White club’s Director of Institutional Relations, Emilio Butragueño. Former Real Madrid captain Fernando Hierro also expressed his deepest condolences to Di Stéfano’s nearest and dearest, referring to the deceased as a "player that represented the club. He walked out onto the pitch as the best player in the world and never stopped working. He was a role model".

The whole Real Madrid family has been at hand to wave goodbye to the eternal figure of Spanish football, like the Whites’ current captain, Iker Casillas. "I saw him for what he was, an institution. He was an important person for everyone; I was particularly close to him because we spoke a lot. A great person has gone", said the Real Madrid goalkeeper.

Presidents from other Liga de Fútbol Profesional (LFP) clubs and ex-teammates and opponents also took the chance to pay their final respects to 'La Saeta Rubia' (The Blond Arrow). "He always inspired a winning mentality in the rest of his teammates. He was an honourable man who gave his all for the jersey", declared veteran player José Emilio Santamaría. Additionally, Enrique Cerezo, the president of Club Atlético de Madrid, expressed his admiration for the former player and stated that "he did not only do great things for Real Madrid, but for Spanish football as a whole"

Meanwhile, the minister of Education, Culture and Sport, José Ignacio Wert, represented the world of politics at the event: "He changed the world of football and sport. He always cared about children, telling them that if they wanted to play football they could not forget about their studies either".

An emotionally charged farewell full of fond memories in which Ana Botella spoke of the city of Madrid’s plans to build a tribute in his name. "We will purpose that a public space in the city, like a street, bears his name", stated the Madrid mayoress.