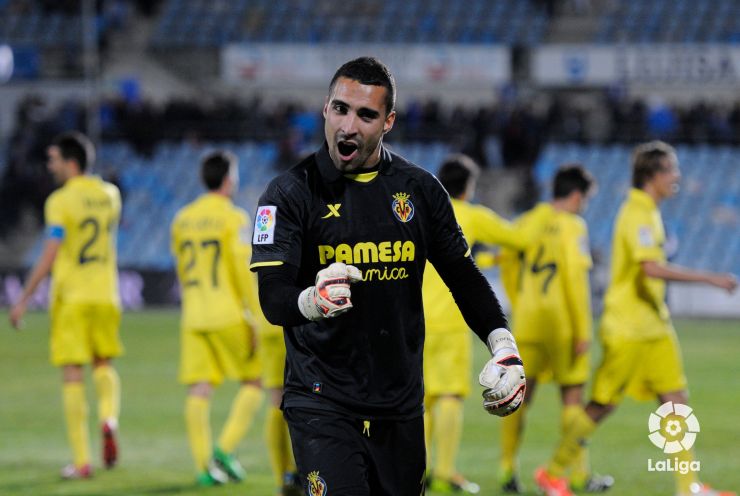 "I am happy again at Villarreal"

After a spell of injuries, the keeper from Palencia is currently firing on all cylinders. With the objective of reaching the European spots, this weekend Asenjo visits the Vicente Calderón, which was his home for four seasons.

Sergio Asenjo (Palencia, 1989) is a happy man. Since 21 years of age he has lived through a series of injuries that have not allowed him to demonstrate his capabilities. Now, at nearly 25 and with a long career ahead of him, he is thankful for having regained the trust of his manager. "I want to settle in the Liga BBVA", he revealed assuredly to LFP.es. At Villarreal he has found his place and this season the challenge there is to reach Europe, and it is one he is working towards "with humility and ambition".

LFP.es: An emotional weekend is coming up. What are your feelings about returning to what was your home for so long?
Sergio Asenjo: It will be a special match in personal terms as I’ll reunite with a lot of friends who treated me well. They were four years during which I had good and bad times.

LFP.es: Injuries prevented you from enjoying your football in that period. Are you looking to prove yourself?
Asenjo: I'm not looking to prove myself, I just try and play my part and help my team as much as possible. I am happy this year. After several difficult years at Villarreal they have given me the chance to play regularly thanks to the confidence of the club’s coaching staff.

"We are facing one of the best teams in Europe"

LFP.es: It will also be a very important match for Villarreal as you are visiting the Liga BBVA leaders. How do you see your old team?
Asenjo: It is having a season to remember. I think they are playing at a very high level, fighting with Real Madrid CF and FC Barcelona, without exaggerating things I think we are facing one of the best teams in Europe.

LFP.es: You are also having a great season…
Asenjo: We started with our minds set on securing survival as soon as possible. We are a very young and humble team and our coach knows how to get the best out of all of his players. The season started as well as it could have, with 40 points before we expected. We have been in the European spots all season, and although now we have dropped off a bit, we are fighting for the Europa League positions. I think it would be a fantastic season if Villarreal plays in Europe next year.

LFP.es: What's the secret of this Villarreal?
Asenjo: I think youth and ambition. We go about our work with humility while being able to make the most of our strengths. I think the coach has made this team into a big family with people who are looking to find a space in the top-flight. We are having a season that nobody expected and the key to the team is the will to work hard and do things well.

LFP.es: Víctor Valdés is the latest Liga BBVA player to suffer a torn ligament. You know about this injury better than anyone. What advice can you offer?
Asenjo: I had to go through it at 21. They are things that unfortunately happen to sportsmen. If the operation is successful, Valdés will be the same when he returns, as happened with me and a lot of other players. I can only say that there is a lot of work ahead of him in order to return as soon as possible, and I'm sure he will be one of the best keepers in the world once more.

LFP.es: Does something like that give you strength in the future?
Asenjo: It made me mature. You go through very lonely times when you are recovering because the team works at a different rate. It makes you mature and value a lot of things. Thanks to the injury I learnt to value a lot of things and I really enjoy each training session I have now.

LFP.es: At 25 years of age you have a long future ahead of you. What are your goals?
Asenjo: I would like to settle in the Liga BBVA and keep playing regularly, as I have this season. I am happy again and enjoying it. I want to play as long as possible and be able to be in the top-flight and playing at a good level. But above all I want people who watch me to be able to see the true Sergio Asenjo, as they are this season.

LFP.es: We are in the midst of the closest Liga in the last ten seasons. How do you see it?
S.Asenjo: The Spanish league is taking giant leaps forwards and it shows this year with Atlético de Madrid joining the title fight. In Europe you can see that Real Madrid, Barcelona and Atlético are also fighting for the Champions League title. Sevilla FC and Valencia CF are also doing well in the Europa League. Hopefully we will stay on this road and La Liga will be seen as one of the strongest leagues in the world.