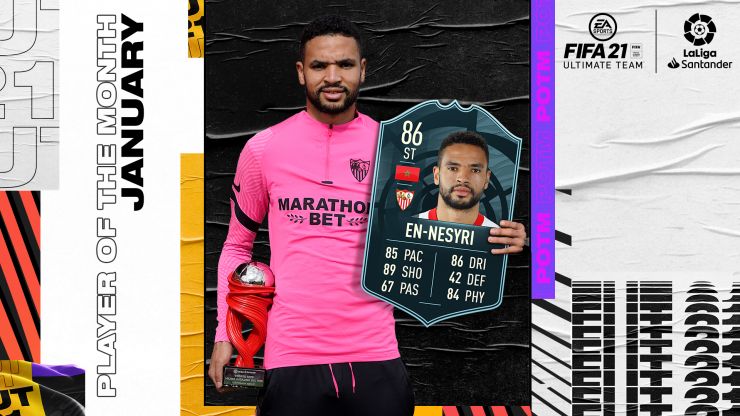 The Sevilla FC striker wins this award as the standout performer for the month, firing in the goals and elevating himself to the LaLiga Hall of Fame with two hat-tricks.

Youssef En-Nesyri has won the LaLiga Santander Player of the Month Award for January. The Moroccan player is an essential cog in Julen Lopetegui's machine and his keen nose for goal has made him one of the most coveted strikers at present.

He netted seven goals in the six games played in January and is the second-highest scorer in LaLiga Santander and in the Sevilla squad, on a total of 12 for the season. What's more, En-Nesyri has made history in LaLiga by scoring two virtually consecutive hat-tricks: The first came against Real Sociedad (Matchday 18) and the second against Cadiz CF (Matchday 20). Of the 13 points amassed by Lopetegui's men in the competition last month, the Moroccan maestro had a direct influence on nine of them: two wins with the six goals mentioned previously and another goal in his side's win over D. Alaves.

The Sevilla player came out ahead of the rest of the candidates in the voting for the award: Luis Suarez, Toni Kroos, Frenkie de Jong, Pau Torres, Sergio Canales and Roger Marti.